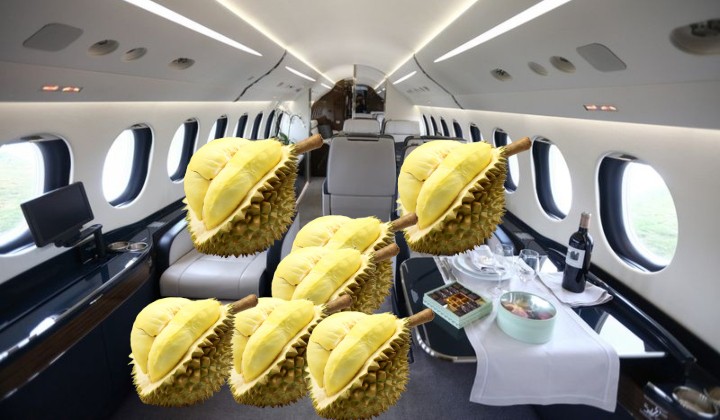 While we can only dream about flying on a private jet, 20 tonnes of durians are already living that jet-setter lyfe.

Several varieties of the infamous fruit, including the ever-popular Musang King, were flown in an inaugural flight to Zhengzhou, the capital of the Henan province in China, yesterday.

While this was the first time whole durians were flown to China, it wonâ€™t be the last.

Malaysiaâ€™s special envoy to China, Tan Kok Wai, said that the government is aiming to expand the number of flights from two or three per week to daily chartered flights for the fruit.

You might ask, why is Malaysia sending so many durians to China? Through private jet some more.

No, itâ€™s not because most people have refused to fly in a plane filled with durians.

Itâ€™s because people in China wanna eat some durians!

â€œLess than 1 per cent of the Chinese population have tasted Musang King before and exporting the whole fruit to China will allow us to expand the market even further,â€Â

Donâ€™t be fooled, even though 1 per cent of Chinaâ€™s population might sound like a small number, it actually means a consumer base of about 14 million people.Â

No Sleep No Fomo Durian GIF from Nosleepnofomo GIFs

So, if China likes our durian, why is this chartered flight only happening now?

Well, the flight yesterday was a result of the China (Henan)-Malaysia Agriculture Supply Chain Platform aimed to promote and strengthen agricultural trade between the two countries.

In fact, Malaysia only began to export whole durian fruits to China in June.Â

Prior to that, Malaysia was only able to export durian pulp, paste, and other processed products to the country. Last year, Malaysia reportedly exported 235.62 tonnes of durian products to China.

Malaysia To Have Priority Access To Chinese-Made Covid-19 Vaccine