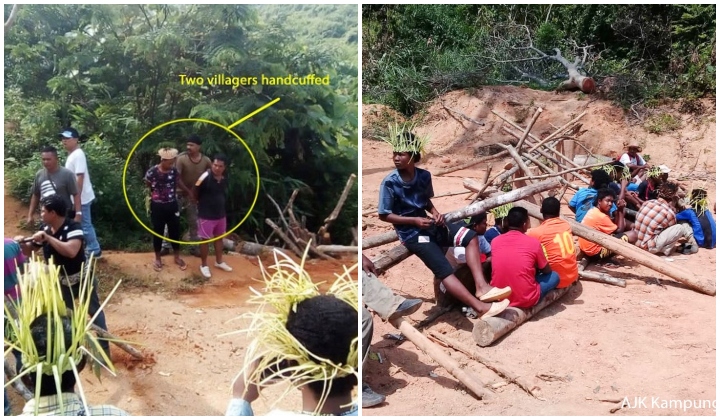 It took many years, but the plight of the Orang Asli have
finally reached the ears of urban Malaysians.

From mysterious illnesses to birth control and conversion controversies, it’s clear that this group has been battling many enemies just to get their basic rights.

However, it looks like the battle wages on as news of a blockade
at Sg Papan/Kg Air Laba by the Temiar people which led to police detaining three
of the Orang Asli spread on social media.

The Center for Orang Asli Concerns (COAC) took to Facebook on Saturday (20th July) to share what was happening in the forest of Sg Papan/Kg Air Laba where the Temiar people faced off with loggers.

Their blockade was breached around 10 am with loggers and
police on site.

Three villagers were then handcuffed and detained for
attempting to stop the loggers and brought to Gerik.

According to the COAC Facebook post, the villagers demanded that the loggers show their permits after they saw a couple of bulldozers attempting to ram through the blockade last Thursday. A verbal spat ensued and both parties threatened to make police reports.

The next day, police arrived and there was a standoff, but
the State Director for JAKOA-Perak happened to make a planned visit on that day
and intervened.

With JAKOAâ€™s help, the Temiar representatives met an officer
of the Perak Forestry Department who told them that such logging permits were â€œrahsiaâ€
(secret).

Unable to proceed any further, the villagers returned to the
site of the blockade. The next day, the â€œarrestsâ€ happened.

The Star reports that Gerik police said that they received two reports from the logging company last week, unhappy about the blockades built by the Orang Asli at Kampung Sungai Papan and near the Air Chepam Forest Reserve.

â€œAll three parties held a meeting but the Orang Asli insisted that the forest land there was their ancestral land and said that they would continue defending the blockade.â€

“The workers again tried to demolish the blockade. About 25 orang asli also created a human blockade to stop the workers.”

The action of the police in handcuffing the Orang Asli was rebuked by P. Waytha Moorthy, Minister in the Prime Minister’s Department, who said that Orang Asli customary land rights surpassed the right of state governments.

â€œTime and time again the highest court in Malaysia has recognised the Orang Asli customary land rights as superior and supersedes the right of the state governments under the Federal Constitution.

P. Waytha Moorthy, Minister in the Prime Minister’s Department via The Star.

The Star reported that she chided the state government for issuing permits to loggers and developers despite knowing that the Orang Asli will defend their ancestral lands.

According to COAC, the Sg Papan/Kg Air Laba blockade still
stands, despite the almost daily attempts by loggers to dismantle it.

The latest update by COAC states that the loggers together with the police and forestry department visited the blockade yesterday and took pictures and measurements of the logs.