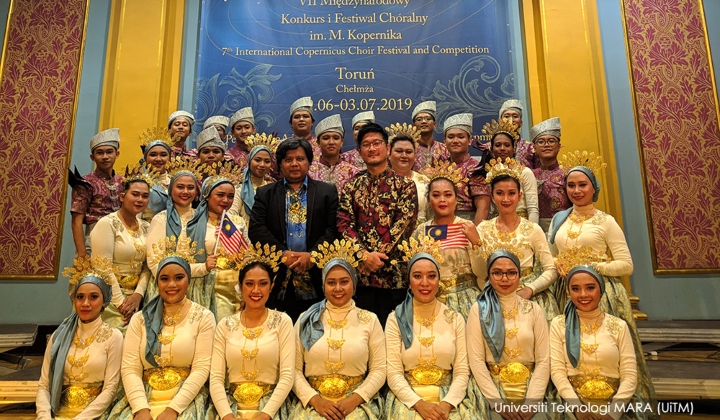 On top of those three gold medals, they also won two special awards during the competition; the Special Audience Prize and the Grand Prix of All Volunteers Award.

The three gold medals won were from all three categories they took part in. YAY!

Meanwhile, the Special Audience Prize was won when an image of their team was uploaded onto Facebook and raked in over 7,500 likes.

And the Grand Prix of All Volunteers Award was won based on votes from volunteers at the competition.

FYI, the categories they took part in were Mixed Choir, and Folklore; which were won by UCC, and Female Choir; which was won by UCS.

52 choir teams from all over the world took part in the competition, which was held between June 29 and July 3 in Poland.

Out of the 52, only 12 teams made it to the finals; Poland, Latvia, Lithuania, Taiwan, Philippines, Indonesia, South Africa and Malaysia.

During the competition, UCC performed three songs at the Friendship Concert and contended 11 songs (both local and international) during the whole competition.

If youâ€™re like us and super curious to know what this world class choir team sounds like, we found a video on Twitter of them performing their universityâ€™s anthem while they were in Poland.

The choir teams have since progressed to their next competition in Germany. They are currently competing at the Johannes Brahms Choir Festival and Competition di Wieneigrode which takes place between July 3 and July 7.

Hope you all bring back more gold medals, team! Weâ€™re rooting for you!