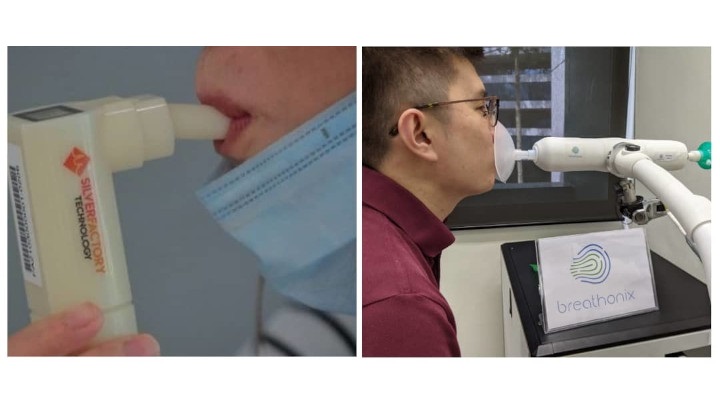 In case you haven’t heard, our neighbours Singapore have created a breathalyser that can detect Covid-19!

Gone are the days of uncomfortable nose swabs that tickle your brain…almost.

Results in less than 2 minutes

The breathalyser works similar to an alcohol one where the person would need to blow into the test for 10 seconds.

The system then tests for volatile organic compounds (VOCs) from the air exhaled into a mouthpiece connected to analytic equipment.

The assessments can produce results in 40 to 60 seconds and anyone who tests positive will have to undergo a PCR screening for confirmation.

The brains behind the breathalyser

Credit goes to two Singaporean start-ups that individually worked on the device in a bid to open up Singapore’s economy while controlling the coronavirus.

The TracieX breathalyser was designed by medtech firm Silver Factory Technology. It has been shown to be almost as accurate as polymerase chain reaction (PCR) tests and can detect a positive case 95% of the time.

Silver Factory, founded in January last year as a spin-off from Nanyang Technological University, aims to produce at least 200,000 breathalysers a month from June and has already begun testing at Singapore Changi Airport.

Meanwhile, BreFence™ Go was developed by Breathonix, a spin-off company of the National University of Singapore (NUS) which has launched a trial of its system at a checkpoint linking Singapore with Malaysia. Their system is said to have an 85.3% accuracy rate for detecting positive cases.

Breathonix’s system was developed from their cancer detection technology and is described by them and the NUS as “simple to administer by trained personnel but does not require medically trained staff or laboratory processing.”

Both companies have already been awarded provisionary licenses and both have also applied for licenses in other Southeast Asian countries, as well as in the Middle East.

What does this mean for Malaysia?

According to The Star, My EG Services Bhd (MyEG) inked a memorandum of understanding (MoU) in May to bring in Breathonix’s test system to Malaysia and will apply for the requisite regulatory approvals and certifications for the breath tests to be made commercially available.

Breathalyser testing is already being used to test hundreds of truck drivers a day going in and out of Malaysia and Singapore.

Although there is no news yet of whether the system is currently available in other parts of Malaysia, it does provide some sense of security knowing less invasive tests are being made available with a faster turnaround time to detect and combat the virus.