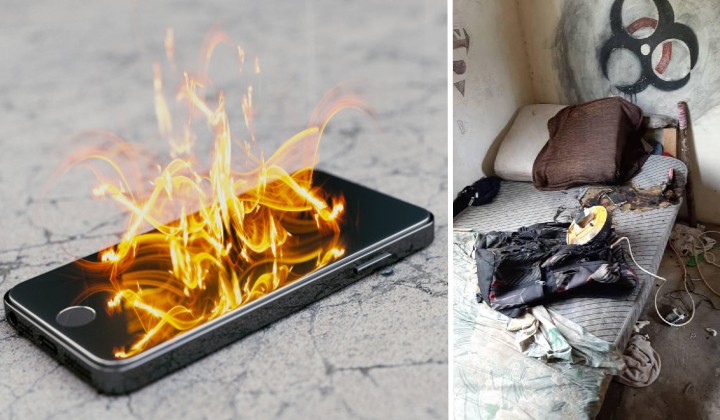 A 20 year old man was found sprawled on his bed; badly injured from an exploding handphone yesterday afternoon, as he slept with his phone on his chest.

Fortunately for him, he survived the explosion as he was quickly rushed to Sarawak General Hospital’s (SGH) red zone with extensive burns on his chest and arms.

So what causes handphones to explode and what should we do?

Why? This can happen when you frequently drop your phones. The thin insulators of the batteries can cause a short circuit

Also, don’t try to temper with your batteries either as they are delicate pieces of tech and you are not McGyver.

What to do? Use original phone batteries and try not to drop your phones.

Why? Too much charging could force too much current into the battery.

Although our phones have a protection mechanism, sometimes things fail, especially when you don’t use the original charger that comes with your phone.

The overflowing current can cause your phone to overheat and subsequently explode.

What to do? Try to only charge your phone only when its low on battery. Don’t charge over night. (Quickcharge and Dashcharge ftw)

And, as trivial as this sounds, don’t sleep with your phone on the bed especially when they are being charged.

It may be common sense, but we urge you guys to remember this as a public service reminder.

Regardless, the issue makes us miss old phones which never truly gave us any problems.