These easy Korean sauces will be a fun new addition to your kitchen pantry. 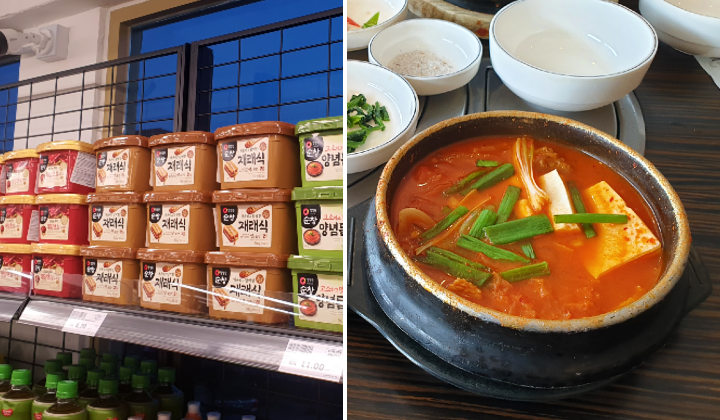 Korean food and snacks have become very common in Malaysian grocery stores. No longer do you need to raid a specialty import store to find what you need for Korean condiments, or shell out money for a meal at a Korean restaurant.

Now, it’s easier than ever to cook your own Korean food at home!

But if you’ve ever walked into the Korean food aisle, you might find yourself overwhelmed. There are so many colourful tubs with words you can’t read– which is what?

You would probably have spotted three main different kinds of Korean pastes in rectangular plastic tubs. While there are actually more condiments you should keep an eye out for, these are versatile and easy to use in many ways that would be a delicious addition in your kitchen pantry. You won’t even need to get all of them: just choose a favourite that works best with your favourite kinds of Korean dishes!

Gochujang is made with fermented soybean paste, glutinous rice, and red peppers. It’s also the backbone of common Korean dishes, with its complex, sticky, spicy-sweet flavours, so you would find it quite familiar. Despite being called “red pepper paste” and its deep red colour, the spiciness is milder than what we Malaysians are used to. (Of course, spiciness does vary between brands.)

Frankly, gochujang does all the hard work in these dishes. I personally think it’s a very versatile paste, so if it’s your first foray into Korean cuisine, this would be the sauce to pick.

Doenjang is Korean fermented soybean paste. Although there are “technically similar” soybean pastes such as Chinese doubanjiang and Japanese miso, their method of fermentation and ingredients result in differing tastes and flavour profiles.

Korean doenjang would likely land somewhere in between the two: not as spicy, strong, and savoury as doubanjiang; but also more complex, earthier, and deeper than mild miso.

What it’s used in: Traditional Korean soups and stews.

If you’re more fond of traditional homely soups and stews, doenjang works as a great soup base. Try it for Korean-style tofu soup, cabbage and pork stew, or radish soup.

Ssamjang is basically Korean-style barbecue sauce, also made with a mixture of soybean pastes and added ingredients, tweaked specifically to go with delicious Korean barbecued meats.

Ssamjang literally translates to “wrapping” and “sauce”, because it’s meant to be used in ssam, or Korean lettuce wraps commonly eaten during Korean barbecues. Take a large piece of crisp lettuce, top it with meat, ssamjang, and anything else you want, then eat it with your hands.

What it’s used in: Ssam with barbecued meats or dipping sauce for vegetables.

Of course, ssam is a lot more fun with friends and family, but if you are a big fan of grilling and barbecueing meats at home, why not try something new with a Korean twist?