If you don’t know what lei cha is, now is a great time to try it out. 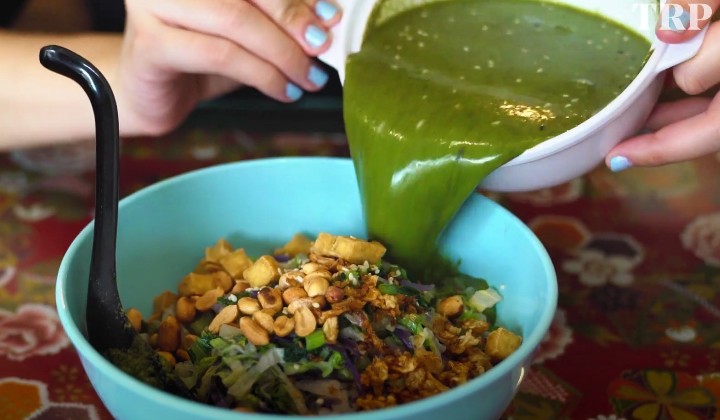 A’Tan Coffee Shop is a familiar establishment in Taman Connaught, Cheras, frequently visited by locals and are pretty well-known for their delicious and hearty lei cha.

Lei cha is often considered a pretty nourishing and healthy food, with their large amount of chopped vegetables and tofu bits mixed with roasted nuts and seeds.

The broth is cooked with tea leaves for a refreshing soup, though A’Tan adds some mint leaves into their recipe for an even more fragrant taste.

The soup broth should be poured over the dry rice and toppings in one go and stirred well. The end result is a hearty porridge-like dish that’s savoury, healthy, and hits all the vegetables you need in a day.

(Of course, some people also like to eat the two separately, but trust us when we say it’s way more satisfying to mix it all together.)

Additionally, it’s a great option for vegetarians or those who are looking to reduce their meat intake, without compromising on a satisfying and delicious meal!

They Began With Instant Noodles

While their name is a bit of a misnomer now, A’Tan Coffee Shop did actually begin as a proper coffee shop.

A’Tan opened its doors in 2008 and first started selling instant noodles from all over Southeast Asia.

This was before imported instant noodles such as Korean ramyun and Thai Mama noodles were easily available, so their shelves were always stocked with a wide variety of brands and noodles from Japan, Korean, Thailand, and even Indonesia.

Then, A’Tan began to offer typical Malaysian breakfast foods such as nasi lemak or fried rice for regulars who needed a bit of a bite in the mornings.

We have a lot of regulars who walk in requesting for certain foods or a certain dish. Eventually, they ask for it so often that we just add it into our menu. That’s why our menu is always expanding.

They expanded to even include a DIY chee cheong fun station, where you pick your favourite sides in the portion you want, and they’ll prepare it for you.

Customers then began to ask for food that was a little more nourishing, such as a typical Chinese meal of “3 dishes 1 soup” to make a square meal. A’Tan found that this menu which comprises of traditional Chinese dishes was extremely popular, so eventually they shifted to a sit-down Chinese restaurant and no longer served the instant noodle and chee cheong fun combos.

Want to see for yourself? Check out our video review below: