Tsang’s birthday kiss was heavily discussed due to his past allegations of sexual coercion. 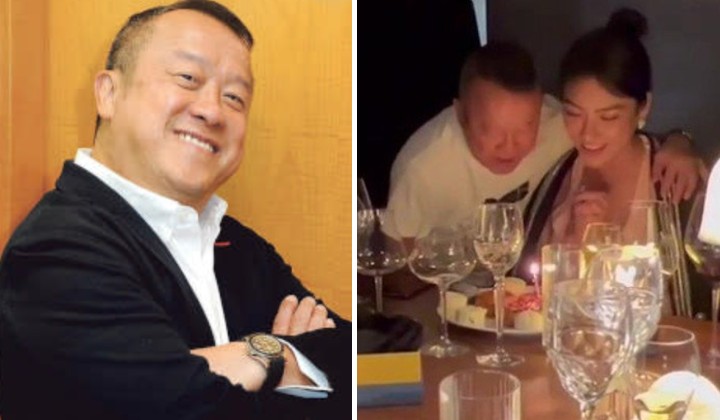 An unknown 26-year-old Malaysian model has stolen the limelight on social media after Eric Tsang Chi-wai kissed her.

Tsang was at a birthday party for Bara Lai, a lanky model 180cm tall.

In the video taken, she was seen busy taking pictures of her birthday cake as friends present clapped and sang the Cantonese version of happy birthday.

Tsang not only sang along during the party but also put his arms around her and joined the birthday girl in blowing out the candles on her cake.

He kissed the birthday girl on her lips, drawing applause from the onlookers and making Lai very happy.

Lai commented about it on social media.

This year I got the Prize Master to blow my birthday candles and wish me ‘Happy Birthday’, my wish this year is (for) world peace without any hatred.

Malaysian model Bara Lai on being kissed by Tsang on her birthday.

Netizens Are All Abuzz

Lai is a relative newcomer in the entertainment industry, but her resume included a jewellery commercial shoot with HK actor Benjamin Yuen.

Lai is the rumoured goddaughter of prominent Hong Kong businessman Lawrence Yu and a regular feature at yacht parties and elite parties.

She enjoys a massive following on her social media profile which is full of pictures of her out at sea and outfitted in bikinis which show off her curvaceous figure.

Netizens speculated about her relationship with Tsang, given that he acted as if he was her boyfriend during the party.

They questioned if this was a birthday celebration or if the birthday girl was being taken advantage of.

It caught so much attention that HK pundits also discussed the incident besides reporting by local media.

In response, Tsang said he was merely trying to be polite and dismissed the matter as trivial.

The media quoted Tsang as being there for caviar tasting when an acquaintance brought a few friends over.

They asked if he could join in singing a birthday song for Lai, their friend, which Tsang obliged.

I feel like the birthday kiss was just a slight touch. This is common courtesy. We’ve done the same wishes for friends’ birthdays! Also, we have a habit of not posting it on Facebook. I really don’t think it’s such a big deal.

Tsang said many people called him afterwards, which prompted him to speak about the matter.

He added that being a celebrity, it is common for people to ask him to sing happy birthday.

Tsang said when he goes to birthday parties or weddings, people always call him on stage to sing together.

He added that he had done this with reporters he was familiar with and that they were even more intimate in the past.

Tsang is best known for hosting the variety show Super Trio series on the Hong Kong television network TVB for over 18 years.

He is mainly known as a comedic actor thanks to 80s hits such as My Lucky Stars (1985), which featured Penang as a tourist destination.

In 2014, Tsang was in Ipoh to shoot the movie Hello Babies. The movie was shot at Gaharu Tea Valley in Gopeng and the Foh San Restaurant in Ipoh.

In September 2021, he was promoted to general manager of content operations at Television Broadcasts Limited (TVB).

TVB contents are popular in Malaysia and it is the top channel viewed by Chinese subscribers on Astro.

The popular shows include the Super Trio Series variety show hosted by Tsang, so famous that it had remained in production for 18 years.

He is no stranger to controversies and has often been surrounded by a bevvy of beauties.

Recently, he was accused of staring at Miss Hong Kong contestants during the swimsuit segment.

Tsang, a host at the pageant, said he could only look in that direction due to his height.

Tsang, regarded as a ‘big brother’ in HK showbiz, denied the accusation and claimed it was fake news.

The incident was said to be why Lam turned from a budding actress to a mental patient.

Tsang also faced other accusations of sexual misconduct throughout his career, including allegations of drink spiking and date rape drugs.

This is Yammie Lam (藍潔瑛), she was found dead today. She was a famous Hong Kong actress. 30 years ago she was raped by two actors, Eric Tsang 曾志偉 and Alan Tang. After that she gradually lost her mind, and ended her life broke and in mental institutions. pic.twitter.com/wYjc1NrOPf