Najib’s legion of fans say he speaks and understands the interests of Malaysians. 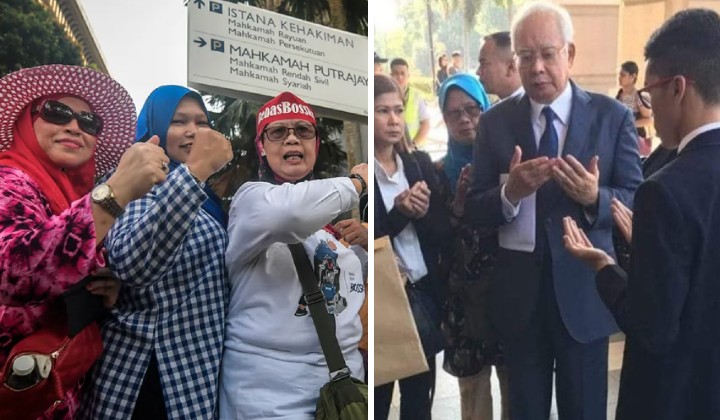 They wept over his looming jail term and prayed to the Almighty to vindicate him, chanting ‘takbir’, a typical Islamic Arabic expression meaning God is great.

Social media have been flooded with videos showing pro-Najib loyalists in deep emotions as they gather outside the Federal Court in Putrajaya.

Their passion for the Pekan MP drew the ire and amazement of netizens who see it as something that defies logic.

Najib’s critics said his supporters must have lost their minds to blindly support a convicted criminal.

Not surprising at all, Tom.

In Malaysia, there are Najib aka Bossku die-hards/loyalists groups.

In US, there are the Trump MAGA fans, which the left/liberals prefer to call them as Trump cults.

Others claimed that Najib’s supporters are only there because they are paid and would no longer appear once their paymaster is behind bars.

In Najib’s defence, some said it’s not right to judge people sent to prison.

They added that Najib must have done many good things, which is why some Malaysians continue to stand by him.

They added that his immense popularity on Facebook after he lost the election in 2018 would surely count for something.

READ MORE: “Your Truth, My Truth And The Truth” Zahid Urged Najib To Continue His Fight To Clear His Name

At the same time, Najib’s supporters said his imprisonment would not be in vain.

They believe it would galvanise the people to vote for his party Umno and Barisan Nasional in the next general election.