Former deputy prime minister Zahid Hamidi reminded convicted former prime minister Najib Razak that justice is a long road and UMNO will continue to support him in his bid to clear his name over the SRC scandal. 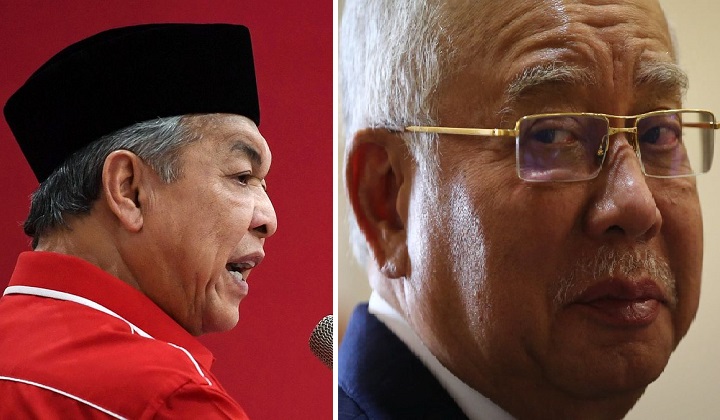 UMNO President Datuk Seri Ahmad Zahid Hamidi beseeched his predecessor Datuk Seri Najib Razak to continue his fight to overturn the conviction imposed upon him with regard to the SRC International Sdn Bhd’s scandal.

Taking it to Facebook, Zahid, who was Najib’s deputy when the Pekan MP was the prime minister, said that, while he respected the Federal Court’s decision to reject Najib’s counsel’s plea to adduce new evidence in his final appeal in the SRC case yesterday, it wouldn’t stop UMNO from continuing to stand behind its former president.

Justice is indeed a long road. There’s a saying that there are three types of truth. Your truth, my truth and the truth. Truth Is God’s Word.

The Bagan Datuk MP wrote on his Facebook today.

He also urged party members to stand in solidarity with Najib who had been found guilty of abuse of power, money laundering and criminal breach of trust over SRC funds amounting to RM42 million by the Kuala Lumpur High Court in July 2020.

“Do not give up. Be patient and keep fighting with us,” he added.

Zahid also said that Najib had been instrumental in bringing back the support from the rakyat, especially through social media, following Barisan Nasional’s defeat to Pakatan Harapan during the last general election.

“During PH’s 22-month-long ruling, he had managed to dispel the attack on UMNO when the party was being belittled and tried to be buried by (our) political foes.

“Through social media, he managed to reply back to all attacks from enemies from in and outside of the party through data and facts,” Zahid said, adding that Najib had also played a pivotal role in helping UMNO and BN win the Sabah, Melaka and Johor state polls in recent times.

Yesterday, the Federal Court rejected the former prime minister’s counsel’s plea to adduce new evidence and an extension to postpone his final plea to get his conviction overturned.