One of his eye is not blinking, and he can’t smile on the side of his face. 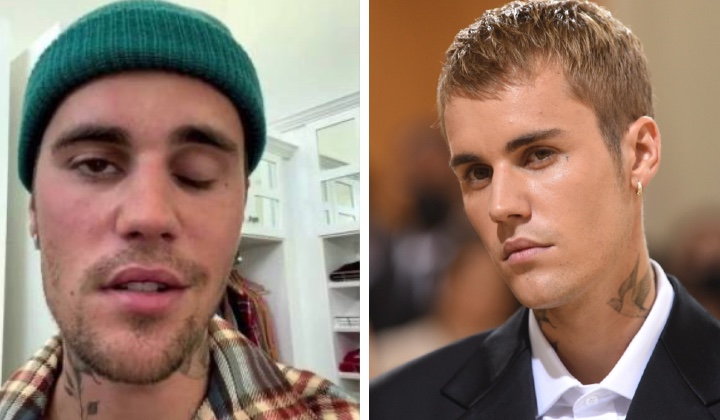 The syndrome is set off by a shingles outbreak affecting the facial nerve.

Bieber has had to cancel recent shows and apologised to fans saying he needs to rest, and it is unclear at this point whether those shows will actually still happen.

He is currently going through facial exercises to try to get his face back to normal.

Everyone, Justin here. I wanted to update you guys on what’s been going on. Obviously, as you can probably see from my face. I have this syndrome called Ramsay Hunt syndrome. And it is from this virus that attacks the nerve in my ear and my facial nerves and has caused my face to have paralysis.

Justin Bieber on being diagnosed with Ramsay Hunt syndrome.

Bieber said he’ll be using this time to just rest and relax and get back to 100% so that he can do what he was born to do.

He also assured fans that he would get his face back to where it’s supposed to be.

Justin Bieber thanking his fans for being patient.

What Is Ramsay Hunt Syndrome?

Ramsay Hunt syndrome is caused by the varicella-zoster virus (VZV), the same virus that causes chickenpox in children and shingles (herpes zoster) in adults.

Also known as herpes zoster oticus, RSH is a rare yet severe condition that causes facial weakness or paralysis, but that’s not the only thing you have.

You also have pain and rash on the same side and it is basically the same virus that causes chickenpox.

It can reactivate and that’s what most people know as shingles.

However, while shingles develop only a rash, the nerve is involved in RSH.

So, as his nerve has been involved, it affects his facial motion and his eyes can’t close properly.

People with Ramsey Hunt syndrome can have problems to the eyes, dizziness and altered taste.

Can You Recover From Ramsay Hunt?

Strong anti-inflammatory drugs called steroids (such as prednisone) are usually given to treat Ramsay Hunt syndrome.

Antiviral medicines may also be given.

Overall, chances of recovery are better if the treatment is started within three days after the symptoms begin.

A lot of his fans are devastated that he’s not going to be performing in concert.

But fans are also happy that he is able to relax a little bit.

Malaysian fans will undoubtedly be hoping that he recovers in time for his concert in Malaysia in October.

Well, perhaps his fans here shouldn’t panic about it.

People should also be encouraged to know that there is a vaccine for shingles called shingrix.

The Justin Bieber concert set to arrive in Malaysia on October 22 is a welcome sign after ‘live’ music events here ground to a halt two years ago, according to several industry leaders.#Malaysia #News #LiveEvents #Showbiz #Entertainment #JustinBieber #Events pic.twitter.com/IsVRGTswIo

Billie Eilish Is Coming To KL This August And Here’s How You Can Get The Tickets!