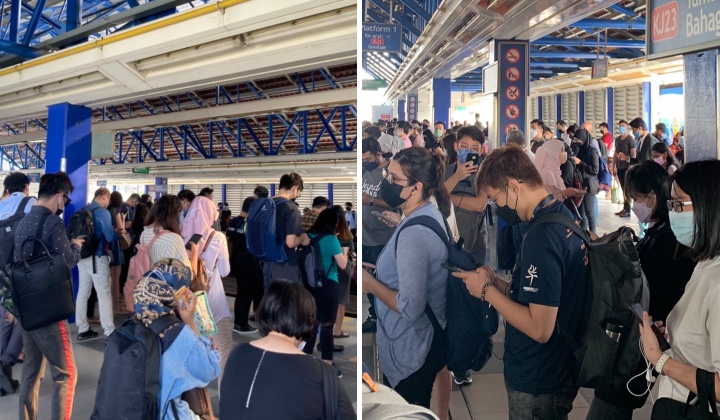 The failure of an LRT train at Taman Jaya station heading towards Putra Heights has resulted in many Kelana Jaya route users experiencing delays in their journey this morning.

Rapid KL said in a tweet at 9.57 am that the train is moving slowly and stopping longer on the platform.

Passengers were advised to look for transportation alternatives.

Earlier, RapidKL said the “failed” train had been removed from service.

An hour later, passengers at Taman Jaya station were asked to board the train at Platform 1 heading towards Putra Heights.

Kelana Jaya Line Update: We have a failed train at Taman Jaya Station towards Putra Heights and is now being removed from service. Updates to follow.

In a similar incident, another train that “failed” on the Ampang/Sri Petaling route was removed from service.

Later that day, service was reported back to normal.

The disappointing incident caught attention on social media, with many LRT users sharing their experiences.

Netizens said that the breakdown casts a bad image on Malaysian public transport and raised questions on maintenance.

A netizen, @thatsmyfullname, suggests each station provide an apology letter that employees can show to employers when they are late due to train services.

Meantime, in Japan, they give you a free ticket and a note to your employer if you were late because of a delayed train.

Netizens said authorities must rebuild confidence among the people with a complete overhaul of the system.

They want Prasarana officials to start taking the LRT’s many problems seriously.

Others lament that Malaysia tried to imitate Japan but has fallen way far off the mark.

Okay, What Happened To Malaysia’s LRT?

The awful decline of the LRT system is nothing new.

It seemed so long ago that Klang Valley folks could still look to the LRT with smugness and appreciate the scope and reliability of their transit system.

The problems seemed to come all at once, out of nowhere.

When a train breaks down, it can have a ripple effect that quickly radiates throughout the system.

It is one of the many reasons that riding the LRT has become increasingly unbearable.

Last year, an LRT train collision near KLCC station and how it was handled by rail operator Prasanara was heavily criticised by members of the public.

•Not surprised Najib only posted this on FB and not Twitter.
•Tajuddin spokesman for LRT accident.
•Najib then became spokesman for Tajuddin who was a trainwreck at the insensitive press conference.
Shameful for UMNO to behave like Prasarana Chairmanship is their birthright! pic.twitter.com/kQzOH2RrbD

Prasarana’s incompetence was so bad it was lampooned by comedians.

It’s not yet clear exactly what kind of overhaul will be needed or how much it will cost the taxpayers.

The authorities must learn their lesson. Make sure funds are managed well and repairs are made on schedule.