The pile-up was due to the lorry’s brake failure. 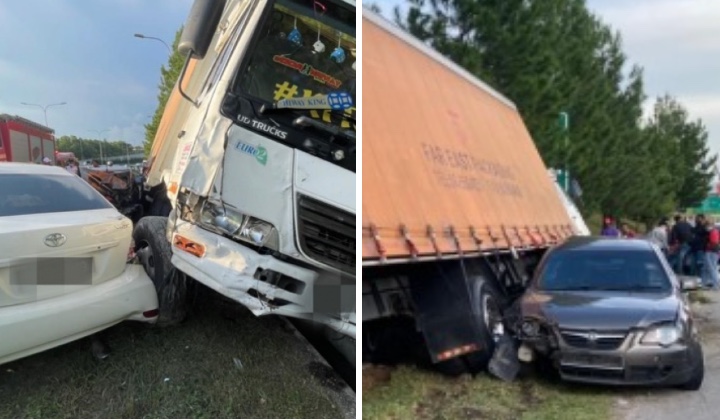 A 10-ton lorry carrying a load of paper rolls weighing about eight tonnes crashed into 11 cars that stopped at the Jalan Persiaran Pusat Bandar traffic light junction this afternoon.

The lorry, driven by a 26-year-old man, was on its way from Melaka to Beranang, Selangor, when it encountered brake problems and lost control.

The lorry skidded and collided with a row of cars at a red traffic light.

The aftermath of the accident was recorded by passersby and shared on social media.

As a result of the accident, a car driver suffered minor head injuries. However, the lorry driver and other car drivers did not suffer any injuries.

He said the lorry driver’s urine test was negative for drugs, and the case was investigated under Section 43 (1) of the Road Transport Act 1987.

Police advise the public to drive safely and adhere to the set speed, especially this festive season.

High-Risk Time Of The Year For Road Users

With massive traffic expected during the festive season, highway authorities have issued travel time advisory for road users to plan their journey.

Meanwhile, netizens urged the authorities to prevent heavy vehicles from using the highways during the festive season.

Heavy vehicles are indeed banned from using certain roads during the festive season, although the enforcement might vary depending on location and day of the month.

On Friday, the North-South highway suffered a heavy jam that lasted for 23km when a heavy vehicle broke down.