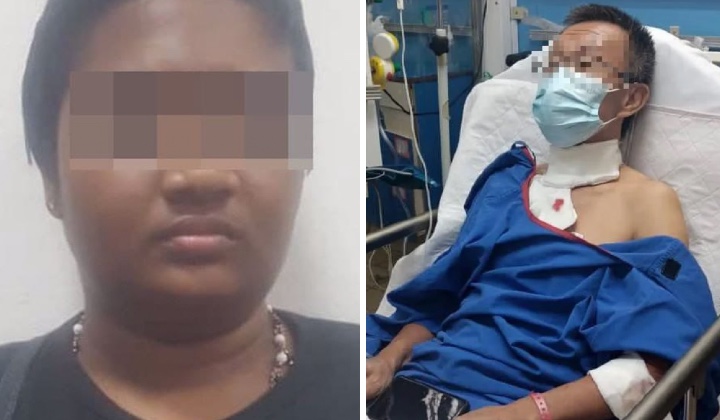 An e-hailing driver was injured in the neck after being stabbed with a folding knife by a teenager.

The teen had refused to pay a fare of RM400 in an incident at Jalan Kovil Hilir, Sentul, here.

Sentul District Police Chief Assistant Commissioner Beh Eng Lai said the police received a report of the incident from the 63-year-old man at 2.55 am last Wednesday.

He was quoted by Harian Metro as saying that the victim took the passenger, a 16-year-old girl in Sagil, Tangkak, Johor, who used an e-hailing application.

Upon arriving at the destination in Jalan Kovil Hilir, the victim asked the teenager to pay the agreed fare of RM400. But the teenager refused to pay because she had no money, and the victim decided to send her to the police station.

Beh said the injured victim then drove to the Sentul Police Station to ask for help before being sent to the Kuala Lumpur Hospital (HKL) for further treatment.

Police conducted an investigation and managed to arrest the suspect at a business premise in Jinjang, here, at 4.55 pm on Saturday.

Police confiscated the suspect’s mobile phone, and a check found she had no past criminal record.

The case was being investigated under Section 324 of the Penal Code.

The law carries a jail term of up to 10 years, a fine or whipping and both if convicted.

E-hailing drivers and food delivery riders have been victims of crime now and then.

Drivers and riders say some companies are doing little to help.

They are considered independent contractors, so they don’t have sick leave, workers’ compensation, or medical insurance through the companies.

The victims are most often single drivers with belongings on the passenger seat.

Criminals tend to focus on female drivers well knowing that they are less likely to chase after them.

This is the point of view as a grab driver. I will not allow single pax to sit right behind me for my safety regardless of any gender. A lot of attack happens (rompak) on that position. Boleh kena jerut dgn setbelt dr blkg, pisau dekat leher dr blkg, with lil to no way to escape.