Except for her, others had no problem entering the mall. 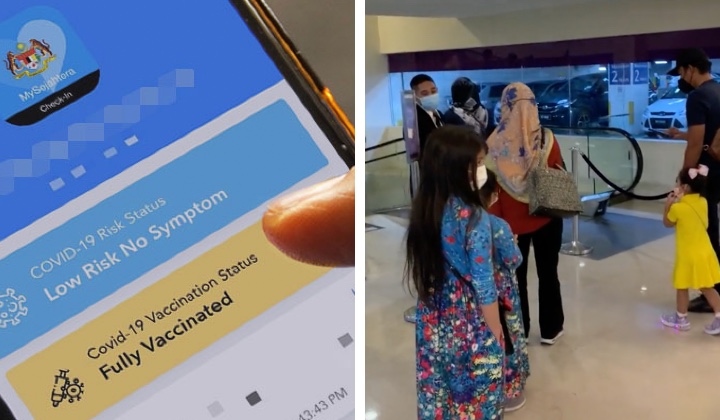 Ever since the Covid-19 epidemic hit, the use of the MySejahtera app has become ingrained in people’s daily routines as part of the new norm.

However, there are still incidents related to MySejahtera that resulted in fights and arguments, as happened to this woman when she visited Suria KLCC.

In a TikTok video shared by a user named @Zaff, a woman was seen raging at the ‘security’ in Suria KLCC.

Apparently, the security did not allow the woman and her children to enter, even though she had scanned her MySejahtera.

Not only that, but the security involved also ignored the complaints of the woman and resumed his task of monitoring other visitors.

Netizens expressed disgust at the woman’s action and gave her stinging comments.

They accused her of deliberately seeking attention by shouting at the entrance of the mall.

On why she was denied entry, some speculated that she is not fully vaccinated yet, in which case she should just stay at home.

Sarcastic remarks were also hurled at the woman, including suggestions that she works at the wet market, given her loudness.

Others noted that there must something wrong with her.

They also highlighted that other people were not blocked from entering the mall, so the problem must be with her.

Regardless of why she was denied entry, most people would agree that raising our voices creates stress and tension that often escalates into an argument.

If we need to be loud to put across our point, we really had no substance or value in the first place.

Expect More Defectors To Rejoin UMNO Before The Next GE, Analysts Say