Her family hadn’t eaten for an entire day and still can’t get food. 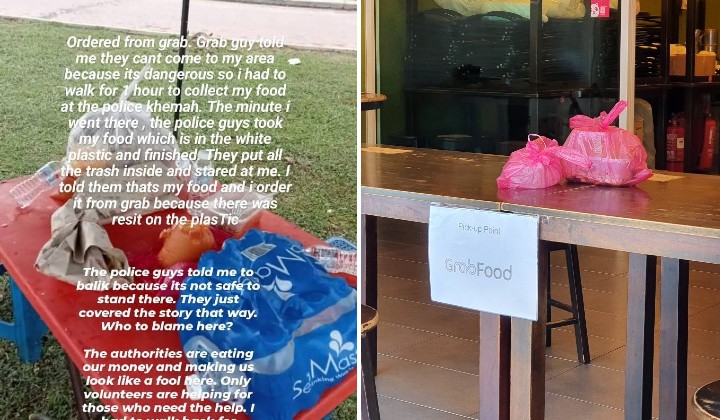 Vaishnavi is a Taman Sri Muda resident who was badly impacted by the flood. Like others who were stranded in the residential area, she and her family only had limited supplies that were not damaged by the flood.

After Vaishnavi’s family had not eaten for a whole day, she finally decided to order food via Grab so that they could finally eat.

However, when the Grab rider arrived, she was told to go and pick it up at the police tent 1 hour away because the rider could not deliver the food into her flooded residential area.

She did so, but to her shock and dismay, her food wasn’t there by the time she arrived.

It was all eaten by police

According to a post shared by Vaishnavi’s cousin which has since been deleted, the order of food was allegedly devoured completely by the policemen manning the booth.

Vaishnavi was devastated and confronted the policemen about why they ate her food. She was sure that it was hers because the large white plastic bag still had her order receipt stapled to it.

The police guys told me to balik beacause it’s not safe to stand there. They covered the story that way. Who to blame here?

Bitter and hungry, she was forced to walk another hour to find food for her family closer to home.

Vaishnavi and her family later only received aid and food from NGOs and volunteers, and have not yet received any help from the government. Luckily, they have received neccessary supplies and are beginning to bounce back from the flood situation.

As for whether or not she is planning to follow up on the case of stolen food, Vaishnavi’s cousin told TRP that the family is busy cleaning out their home and have not yet had the time to lodge a police report.

TRP has reached out to PDRM for further comments.