Malaysia
Brought to You by 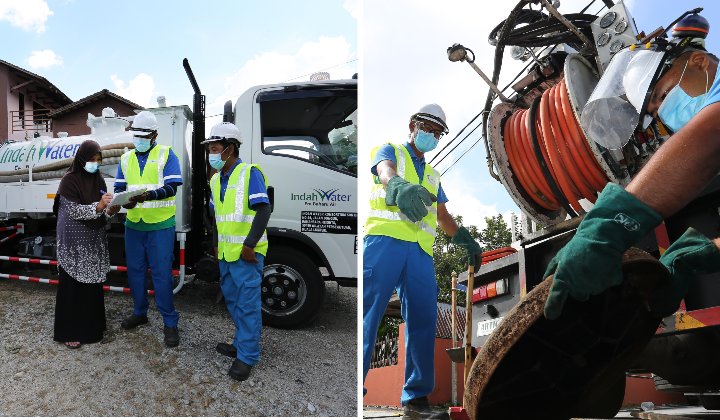 Indah Water Konsortium (IWK) Sdn Bhd will be taking over 191 sewage plants – 147 in Johor Bahru and 44 in Pasir Gudang.

It’s part of the Federal Government and the Johor State Government’s efforts to upgrade and improve the quality of sewerage services in the areas of Johor Bahru City Council (MBJB) and Pasir Gudang City Council (MBPG).

With a population equivalent (PE) of 1.46 million people, IWK will also provide desludging services to approximately 293,236 individual septic tanks as well as traditional tanks in both areas.

This collaboration involves the handover of sewerage services in these two areas to IWK.

IWK’s role as the national sewerage company is able to ensure that sewerage assets are operated and maintained optimally, thus reducing inconveniences to residents and supporting environmental sustainability.

This initiative can also curb the pollution of water resources by improperly treated effluent into 18 major rivers including the Skudai River, Kim-Kim River, and Masai River.

Government pushing for access to sustainable and clean water

Environment and Water Minister (KASA), Datuk Seri Tuan Ibrahim Tuan Man stated that MBJB and MBPG will receive grants from the Federal Government to improve the level of sewerage services such as:

Tuan Ibrahim also mentioned during the signing ceremony that KASA is committed to improving the quality of the country’s sewerage services in line with the Sustainable Development Goal: Goal 6, which is to ensure access to clean water and sanitation as a whole.

The sewerage sector is also one of the critical components in realising the Water Sector Transformation 2040 and is supported through the implementation of sewerage projects with a total allocation of almost RM3 billion under the 12th Malaysia Plan.

Meanwhile, Narendran stated that with 27 years of experience and technical expertise, IWK will ensure that sewerage assets are operated and maintained optimally.

IWK hopes that with this takeover, the sewerage system can be well maintained and can reduce the pollution of water sources by poorly treated wastewater that flows into the main rivers in the two areas of the City Councils, especially the Kim-Kim River, Masai River and Skudai River.

According to Narendran, IWK together with JSW, a subsidiary of Permodalan Darul Takzim needs some time to repair all public sewerage assets in these two areas.

However, IWK will take appropriate measures to ensure that sewerage assets operate as efficiently as possible.

As for desludging services, the Federal Government Gazette came into effect in March and stipulates that owners or occupants whose premises use septic tanks are responsible to ensure that their septic tanks are in good condition.

They will also provide desludging services in accordance with the Water Services Industry Act 2006 (Act 655) under Section 65 (1) (c), where, septic tank owners must empty their individual septic tanks at least once every two years according to tank capacity and household size.

This is to ensure that the septic tank functions properly and does not pollute the environment or public health. At the same time, JSW is the permit holder to carry out desludging work under the supervision of IWK in both areas.

Narendran added that IWK will remain committed in its effort to execute its mandate to operate and maintain the sewerage system efficiently.