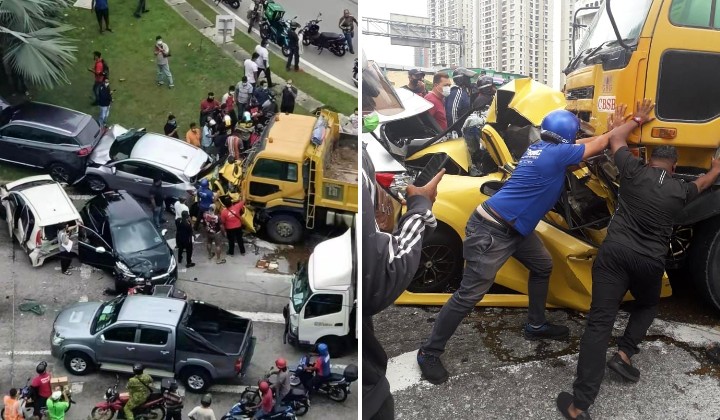 On 6 September 2021, at around 2.40pm, a traffic accident occurred involving 6 vehicles at a traffic light on Jalan Ipoh, Kuala Lumpur. The accident involved one lorry and five cars.

According to a statement by Head of KL Traffic Investigation and Enforcement ACP Sarifudin Mohd Salleh, early investigations found that the lorry was being driven by a Malay male from Jalan Duta to Sentul.

The five vehicles involved were a yellow Myvi, a Proton X70, a Honda HRV, a Peugeot 208 FL and a white Myvi.

Despite the horrifying scene, there were no casualties reported. The driver of the yellow Myvi suffered light injuries to his face and received treatment at the green zone of Hospital Besar Kuala Lumpur, while the drivers of other vehicles did not suffer any serious injuries. All victims were treated and allowed to return home.

The driver of the lorry did not suffer any injuries either and was detained by the police. He was also tested for alcohol.

After the initial alcohol testing showed no intoxication, he was brought to IPD Dang Wangi for a urine test which found him positive for Methamphetamine and Amphetamines.

This case is being investigated under Section 44 (1A) Road Transport Act 1987.