Over 20,000 doctors are estimated to be joining the protest nationwide. 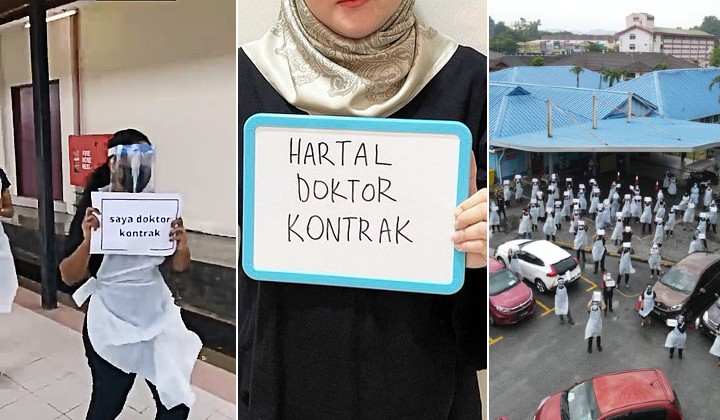 The protest, which started at 11 am, involved a mass ‘walk-out’ from duty by medical, dental, and pharmaceutical medical officers (MO) working under contract with the government.

Among their demands are better working conditions and improvements to the country’s healthcare system.

Read More: Why Are Malaysian Doctors Planning To Go On Strike?

Protestors dressed in black were seen gathered in numbers outside of hospitals across the country with journalists there to capture the scenes.

More doctors are gathering at the open air car park in HKL pic.twitter.com/EsNE5A40H2

Doctors of Hospital Kuala Lumpur staged a walk-out as part of the planned #HartalDoktorKontrak protest. Demand for better conditions have grown as frontliners continue to bear the burden of managing the pandemic.

The planned walk-out stkll occurred despite calls to cancel. pic.twitter.com/Et0Hb7vydv

Streams of support for the hartal were also coming in from cyberspace as netizens lent their social media presence in solidarity with the movement.

Today, I’m in solidarity with my younger brother, my SIL and all our junior doctors who are mistreated, underpaid, overworked and opressed. Everyday I see them suffering but still wake up to treat patients. #HartalDoktorKontrak pic.twitter.com/tfdn54jV0k

More than 20,000 doctors are estimated to join the strike.

It’s understood that stakeholders within Malaysia’s healthcare system tried everything they could to discourage doctors from taking part in the protest.

Health Director-General Tan Sri Dr Noor Hisham Abdullah had yesterday reminded contract doctors of the oath which they had taken as doctors and public servants – pleading to his “junior colleagues” not to abandon their posts in protest.

He also said that the government needed more time to work on solutions for the issue.

The same was mentioned by the Malaysian Medical Association (MMA) President Datuk Dr Subramaniam Muniandy who told medical professionals to remain calm and focus on their work.

He explained that the protests should not go on considering the dire state that the country was in because of the Covid-19 crisis.

Our colleagues in public healthcare have made it known to the public that the healthcare system is highly strained and in need of personnel support. As medical professionals, patient care should be our highest priority.

It’s posting on social media said that disciplinary action can be taken against public servants who take part in illegal demonstrations.

Malaysiakini also reported that over 20 warnings have been given out by senior staff against anyone joining the protest.

Meanwhile, the police (PDRM) is also said to be keeping an eye on the protest.

The #HartalDocktorKontrak movement has set up several rules for protesters taking part in the walk-out, including for doctors to only join if another MO can take over their duties, and to return to their stations immediately if needed.

Protestors were also encouraged to take pictures and videos of themselves holding up placards and signs in a show of solidarity if they are unable to leave their posts.