The viral video features the Home Minister’s Press Secretary who stated that the roundup was put in motion as factory workers breached SOPs to work. 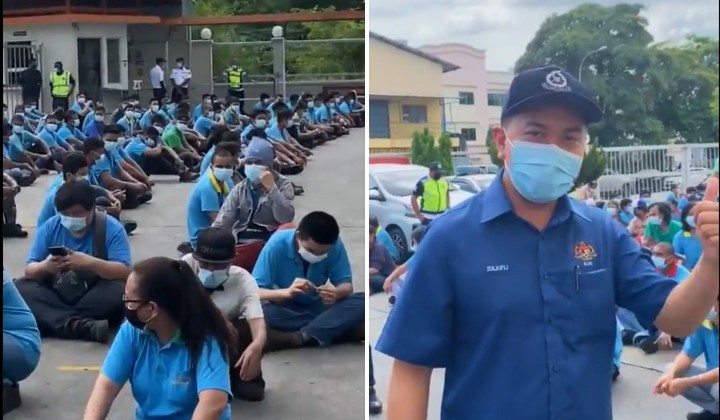 In a viral video taken during the #OpPatuh crackdown on factories that are still operating during this EMCO, rows of factory workers, clad in blue uniforms, were seen squatting in a large courtyard under the hot sun.

In the video, Zulkifli Bujang, the Press Secretary of the Home Minister Datuk Seri Hamzah Zainudin, was recorded stating that the roundup was put in motion as factory workers breached SOPs to work.

These people are working as if there’s nothing happening. Despite the lockdown and instructions from the government that they should not be operating, and instead be following the SOPs.

However, in his next Tweet, he stated they are not arresting the workers, only checking on foreign workers which requires an open space. Further action will be taken against the employers and companies by the relevant authorities.

Where are the employers?

However, the video garnered online attention for the treatment of the workers as well as the distinct lack of action held against the employers of the steel fabrication factory.

Kau punya cakap macam diorang ada pilihan untuk tidak datang kerja. Times are tough, employers are forcing them to come to work, and if they don’t come to work they will face retrenchment. And do you think it’s easy for them to find jobs during this pandemic? https://t.co/cR8EkBVJIA

Netizens criticized the move, stating that irresponsible employers are the reason why employees must break SOPs to continue working, so the blame should not rest on the shoulders of the employees.

Even more noted that for these factory workers who need to work to make ends meet, saying ‘no’ to work is not even an option.

You wanna make a proper report?
Same lines but have the EMPLOYERS squatting in the sun in your background instead. Make THEM answer. Point your damn finger at THEM. https://t.co/CnUf1FArzC

More critisized the video, which pans over the factory workers, for showing the faces of the workers, revealing their identities and placing the blame on them while their employers are not shown or present at all.

The operation is a crackdown headed by the Home Ministry on factories that are operating despite the MCO rules.

Home Minister Datuk Seri Hamzah Zainudin explained that ‘Ops Patuh’ is a nationwide crackdown without compromise against parties found to break SOP and other guidelines under the Prevention and Control of Infectious Diseases Act 1988 (Act 342).

Ops Patuh will be a joint operation between multiple law enforcement agencies, including the Royal Malaysian Police (PDRM), Fire and Rescue Department (Bomba), the Selangor Maritime Enforcement Agency (APMM) and others.

The operation will focus monitoring on the manufacturing sector, restaurants and food outlets as well as businesses, distribution and retail premises in Covid-19 hotspots across the country.

As of today, Senior Minister Datuk Seri Ismail Sabri noted that #OpPatuh has conducted 97,561 checks across the country with a force of 20,781 people.