A government body closed communications with the public. 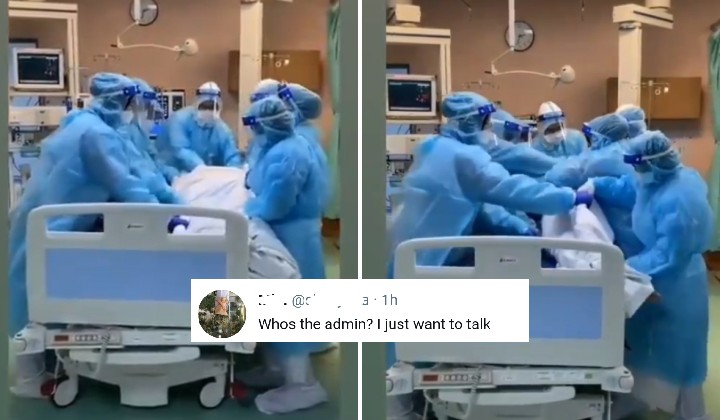 [UPDATE]: It seems that KKM has come under attack recently on social media by anti-vaxxers and Covid-deniers in the Malay and Bahasa Malaysia-speaking community which may have been why their post was worded in the way it was.

Health Ministry staff have faced harrassment on social media from these groups, including being called fakes and liars, being threatened with stoning, and more.

The Tweet, posted on 5 May 2021, showed a video of the effort requied to ensure a Covid-19 patient receives adequate amounts of oxygen. 7 PPE-clad healthcare workers were shown trying to turn over a patient in a hospital bed in Sungai Buloh Hospital. The video itself was taken by a doctor in the hospital, and oddly upbeat music was used.

Respect the staff nurses and doctors at ICU. We’re not asking to be abused because netizens aren’t allowed to go back for Raya.

After a year of Covid-19, everyone is on edge

The passive-aggressivness of the Tweet on the national social media platform rubbed many netizens the wrong way.

Many netizens were quick to call out the unusual blame game. Even more were flabbergasted over the assumption that the rakyat do not respect healthcare frontliners.

Nobody criticising them they worked their ass off during this pandemic get off your high horse and rempit behaviour kkm https://t.co/Aeia8BJZsP

First of all, none in my following list either in Twitter and Facebook has denigrated the medical frontliners; only to speak highly of them for their dedication and commitment throughout this pandemic. https://t.co/fvWvhfDekz

Many wondered who the social media account manager is to approve a post they deemed as “unprofessional”.

It’s the way they wrote “xminta” and “xdpt” for me. So very telling. Stop being a fan page for your fucking minister and his two non-functional deputy ministers. Enable reply function ffs. #KerajaanGagal #apamasalahsaudara https://t.co/gM3GAqbEAD

Later on, the account disabled comments on their social media channel. Critics have since been quoting the account, saying disabling comments shows a lack of professionalism for a government body.

Many condemned the move, as a government body, especially one as important as healthcare in the middle of a pandemic, should have two-way communication with the citizens.