The case is being trialed under the Animal Welfare Act 2015. 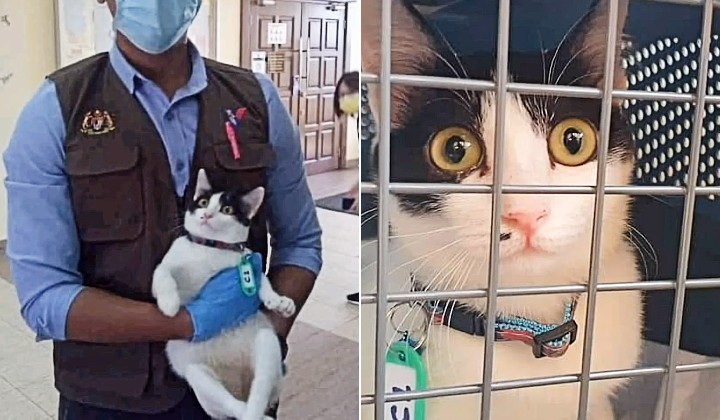 Malaysians are seeking justice for “Baby”, a female black and white cat that was unfortunately paralyzed after being allegedly hit with a metal rod by a 79-year-old retiree in Penang last November.

The feline made a rare appearance at the Penang Sessions Court yesterday (18 March), supposedly coming face to face with the man accused of causing it pain and suffering.

Images of Baby being carried into the courtroom by representatives from the Malaysian Veterinary Services Department (VSD) wearing what appears to be a green evidence tag, marked “C1”, invited empathy on social media as netizens shared their rage and anguish over the animal’s circumstances.

Losing it over this photo. Cat named Baby, a victim of animal abuse, brought to court as evidence. The tag reads “C1” being, Exhibit C1. LOOK AT THAT FACE. IMAGINE THEM HOLDING UP BABY TO THE JUDGE. MAXIMUM PENALTY 😤 pic.twitter.com/MJpsRCd0kJ

Its alleged abuser, a retired teacher named Cosmos Chong Say Hun, pleaded not guilty for charges of animal cruelty under section Section 29(1)(a) of the Animal Welfare Act 2015 (Act 772) for deliberately throwing a sharp meter-long metal rod at the feline.

A guilty charge can result in a maximum fine of RM100,000 or up to three years jail time, or both.

Cosmos reportedly claimed that his actions were the result of the animal dirtying the lawn of his home. He was released by the judge without bail with the next court session set in April.

Previously, a video believed to have captured the senior citizen being confronted by a crying woman while trying to forcefully place a visibly injured cat into a plastic bag went viral online.