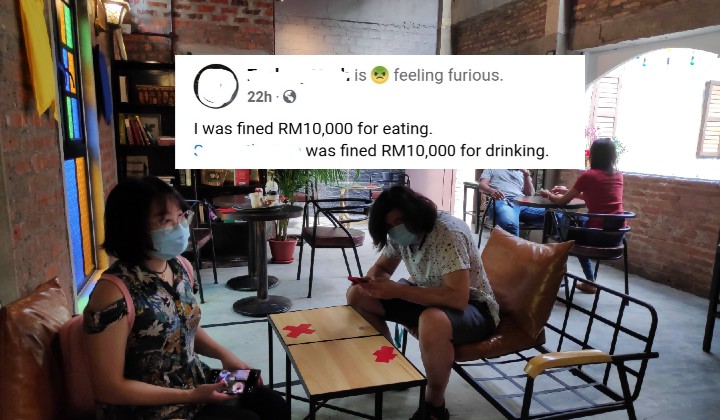 UPDATE: PDRM has released a statement claiming that they did not issue the summons for RM10,000 to the couple while dining at a restaurant in Cheras. The summons were issued by another government agency. However, the couple has been called up by Bukit Aman’s Classified Criminal Investigation Unit on Sunday evening to give their statement as police are investigating the issue.

A Malaysian man and his girlfriend was allegedly fined RM10,000 each for dining in at a restaurant in Cheras.

The man claims that he and his girlfriend had gotten their drinks and taken off their masks to drink.

Shortly after that, a group of 10 officers barged into the restaurant. They allegedly demanded their ICs and proceeded to issue summons of RM10,000 for each of them.

However, many people have raised questions around the allegation, asking the man to provide proof of the summons and questioning if he had checked-in on the MySejahtera app.

Later, the man noted on his Instagram Stories that he made the decision to not upload the summons due to privacy. However, he insists that he followed all the SOPs such as checking-in via the MySejahtera app and maintaining social distance.

Until now, he has not provided any additional information regarding the reasons for the alleged RM10,000 summons.

In an effort to make sure Malaysians follow SOPs, the government has increased the fine for violating SOPs from RM1,000 to RM10,000.

In fact, the government has announced that the minimum fine amount for SOP violations is RM10,000 and above. However, those who face the fine can try to appeal.

READ MORE: Cops can no longer issue SOP compounds below RM10k, those fined can appeal

TRP has reached out to the orignal poster for additional comments.