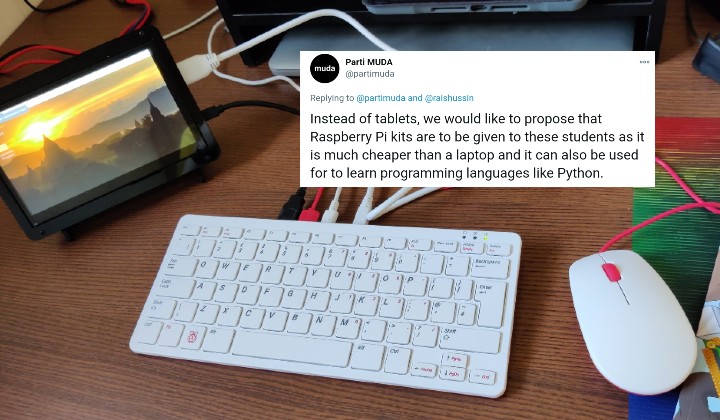 Parti MUDA has announced their interest in sponsoring Raspberry Pi kits for students who do not have personal computers of their own, to aid in their studies at home.

Instead of tablets, we would like to propose that Raspberry Pi kits are to be given to these students as it is much cheaper than a laptop and it can also be used for to learn programming languages like Python.

Raspberry Pi is not a delicious dessert in this context, and is instead a microcomputer. The computer is in a single chip, so small that it literally fits into a small keyboard. It is generally used to teach basic computer science, though it has found plenty of use elsewhere due to its open source design.

MUDA has gone on to suggest packaging a complete homeschooling kit that would allow the Raspberry Pi to meet students’ needs for studying-at-home for just RM800, about a quarter of the cost of a basic laptop with an Intel i5 computer processor.

This complete kit would include the Raspberry Pi 400 computer with NOOBS OS pre-installed, a mouse, a webcam, power supply, a micro-HDMI converter cable, a monitor, and beginner’s guide book.

However, netizens were quick to raise concerns over the proposal. Many feared that the Raspberry Pi would be too difficult and unfamiliar to use, as it does not run on the usual operating systems such as Windows or Mac.

While being expose to programming at a young age is good, you have to understand that we are tackling the issue of online classes. If the users aren’t even ready for online classes in terms of connection and devices, what makes you think proposing raspberry pi is a good idea?

Many in the IT and computer science industry do not see the Raspberry Pi as a viable solution, mostly because the operating system (OS) comes with a steep learning curve to even start using it.

While it is true that a fully well-built Raspberry Pi can function like a normal laptop, it will still require prior technical knowledge and coding know-how from its users.

Coding is an actual language, and just like all languages, requires to be learnt. However, would these students be given the adequate opportunities to learn python coding?

Chrome book is a better solution. KPM is on google classroom anyways so it’s a natural fit. It also cost around RM800 and i guess can negotiate volume pricing and support.

I do IT for a living and don’t recommend Pi for beginners. Nobody is going to support that platform.

Additionally, keeping in mind that these laptops are intended for students within the B40 economic range and in rural areas, the main problems faced is the lack of stable internet connectivity and reliable technical help.

Within a community that may already struggle trying to keep up-to-date with today’s fast-moving technological pace, introducing a brand new operating system with an unfamiliar language would deepen the divide as these students would not be able to get receive reliable help from their teachers or parents regarding these devices.

Something easier for the students

That’s not to say it’s completely impossible for young students to learn with the Raspberry Pi. In India, a teacher had successfully taught his class how to set up and code on the Raspberry Pi microcomputers. However, this was across the span of a 10-day bootcamp with 3 teachers well-versed in computer programming.

Many others suggested that MUDA stick to simple personal laptops such as Chromebooks, which would allow users to do simple things such as going online, attending Zoom meetings, and accessing Google’s office apps such as Docs and Sheets.

Additionally, most simple personal laptops are ready to use straight out of the box, with very little initial setup requried after.

Syed Saddiq, one of the key leaders of MUDA, has actually given out Dell computers to students in Muar earlier this month.