125 crewmembers jumped into the choppy sea with waves as high as 4 metres. 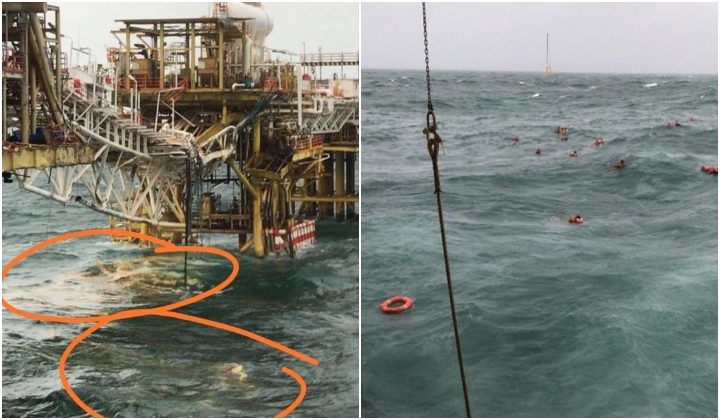 [UPDATE: The Malaysian Marine Department has confirmed that there have been two deaths among the Dayang Topaz crewmembers.]

A maritime disaster caused by stormy weather led to the wreckage of Dayang Topaz this morning with 125 crewmembers jumping into the stormy seas off Miri. One death has been confirmed.

Who said what: Malaysia Maritime Enforcement Agency (MMEA) confirmed the incident took place at 9.29am today. The workboat was wrecked with 62 crew members onboard while 125 jumped into the rough sea.

How did it get here: MMEA suspects an anchor cable snapped off during a storm and crashed onto the deck. The vessel lost control and crashed into an oil rig and 125 crewmembers jumped into the choppy sea with waves as high as 4 metres. Nearby vessels were immediately radioed for search and rescue as 4 people were initially reported missing. All 125 overboard have been found with two dead.

What you need to know: Dayang Topaz is a maintenance vessel registered in Malaysia. The ship was located 7.7 nautical miles from Kuala Baram, Miri when it was hit by the storm.

One dead, four missing, 121 rescued after ship sinks off Miri in Sarawak (The Edge)