With PAS in the state assembly, the party can vote to amend Sabah laws. 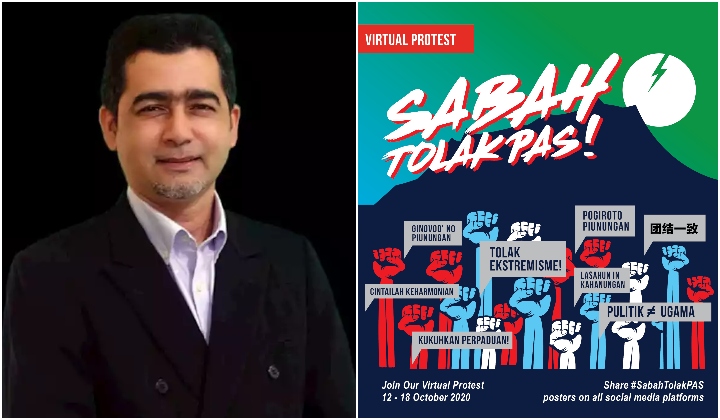 The people of Sabah are leading an online protest against the appointment of Dr Aliakhbar Gulasan, the first PAS member to join their state assembly.

Through the hashtag #SabahTolakPAS, the campaign stated their views against the appointment of Aliakhbar, who was among six individuals appointed as elected representatives in Sabah’s state assembly recently on 8 October.

PAS is a political party. PAS is not Islam. Islam is not PAS.

The campaign shared its views online through a 5-page graphic statement in multiple languages.

In the statement, the campaign highlights PAS’s treatment of Orang Asli communities in Kelantan, adding that the entry of a PAS member into the State Assembly threatens the multiculturalism, racial harmony, and native cultures of Sabah.

Some of the issues concerning PAS that were brought to light included claims that in Kelantan, where PAS is the governing political party, Orang Aslis are mistreated and traditional cultures are oppressed.

Also highlighted was the fact that PAS has not only been intolerant of non-Muslim festivities, people, and culture on multiple occasions but has also outrightly insulted the Bible.

Interestingly, since his appointment, Aliakhbar has reportedly named Herman Obi, who is a Christian, as his special officer in charge of inter-racial relations.

Obi has been a member of Sabah Pas Supporters’ Wing (DHPP) since 2016 and his appointment is believed to be able to strengthen the relationship of the multiracial community in Sabah.

Sabahans MUST defend our racial harmony and indigenous heritages. This means telling Gabungan Rakyat Sabah and Perikatan Nasional that PAS’ presence in the State Assembly and the party’s extremist values violate the Batu Sumpah Keningau and the Malaysia Agreement 1963.

Aliakhbar became a lecturer at Universiti Malaysia Sabah after completing his Phd in urban geography from Universiti Kebangsaan Malaysia. In July this year, he was also appointed as chairman of the Malaysia Cocoa Board.

The virtual #SabahTolakPAS protest is set to last for a week until Sunday, 18 October.

It is supposed to remain online as Sabahans continue to respectfully observe targeted emergency movement control orders (TEMCO) that were implemented in several districts across the state.