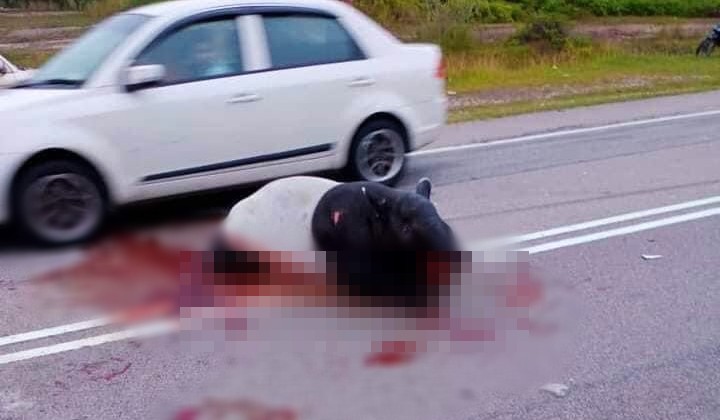 A wild tapir was involved in a car accident at Jalan Bukit Besi near Kampung Seradang in Terengganu.

According to Sinar Harian, the incident happened earlier today at 7am, resulting in injuries to the tapir and two drivers but thankfully no casualties.

According to those involved in the accident, the tapir suddenly emerged from the trees, believed to be wanting to cross the road to enter the jungle. However, it was hit by a car which could not stop in time. The car then spun onto the road, where it hit another car from opposing traffic.

The tapir was seen heavily injured with blood staining the road, while both cars were in bad shape. The tapir then crossed the road to lie in the grass to recuperate.

The Department of Wildlife (Perhilitan) Terengganu director, Dr Abdul Malek Mohd Yusof later noted that the adult tapir fled into the jungle in an injured condition.

The Malaysia Animal Association also reported the case, claiming that the extinction of wild animals in the country is driven by the loss of habitat due to uncontrolled and illegal logging.