The app defines a hotspot as an area with reports of Covid-19 cases within the last 14 days. 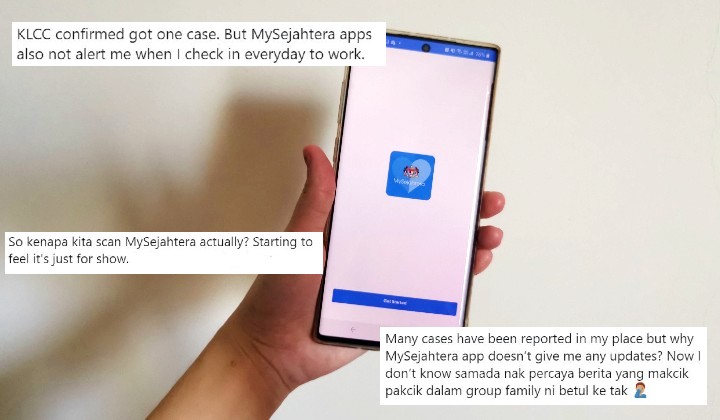 Malaysians online have been angrily questioning the function of the MySejahtera contact tracing mobile application after users report its ‘Hotspot Tracker’ failure to notify users of recent, nearby Covid-19 cases.

The issue became especially prevalent after reports Covid-19 positive cases at several Klang Valley malls flooded social media, but were not indicated on the government-run application.

MySejahtera is expected to provide immediate update for public safety but it seemed that there's no reported case at Nu Sentral. 🤷‍♂️ pic.twitter.com/renShaIL9W

Searched several locations on the MySejahtera app hotspot tracker and there is absolutely no results. Brilliant

So, you’re telling me that I can’t be alerted on MySejahtera itself if I’ve been in the same place as someone who tested positive? So I’ve been scanning a thousand times for… nothing???????

When the ‘Hotspot Tracker’ function was released, Health Director-General Tan Sri Dr Noor Hisham Abdullah said that it was aimed at helping the public to plan their commute and avoid non-essential travel into risky areas.

The app defines a hotspot as an area with reports of Covid-19 cases within the last 14 days, but does not reveal the number of cases in the area or which specific premises are affected.

READ MORE: The Government Created The MySejahtera App So We Can Monitor Our Covid-19 Risk

Following the uproar, MySejahtera and the Health Ministry released a statement explaining the absence of these hotspots on the app.

As a matter of fact, a location being considered a hotspot is purely based on in-depth investigation by MOH on the definite and possible source of infection. All these are based on facts and science.

An anonymous MOH officer had also previously told healthcare news portal CodeBlue that the tracker works based on data provided by the Crisis Preparedness and Response Centre’s (CPRC) daily investigations.

What you see on MySejahtera hotspot tracker comes directly from CPRC, so it is based on investigations and massive collaboration with manual data. Don’t dispute — there is no need for the public to dispute because this is done by CPRC, by epidemiologists, it is not that we simply want to mark that area red.

However, the function had caused some confusion in late August when several users found that two areas in Subang Jaya were marked as Covid-19 hotspots, but authorities denied that the areas had reported positive infections.