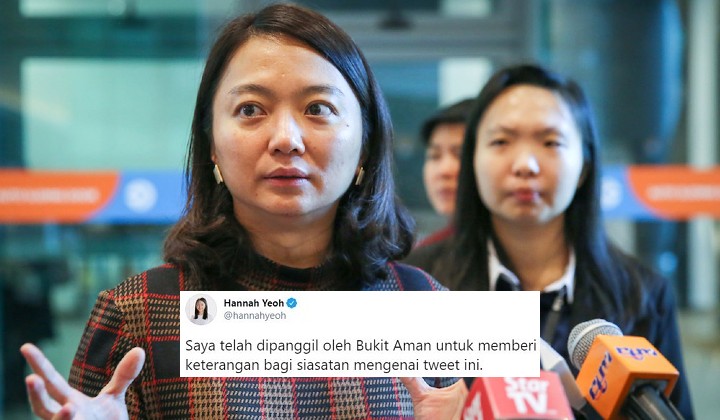 Former Deputy Minister of Women, Family & Community Development Minister Hannah Yeoh revealed today that she had been called in by Bukit Aman over a tweet she had made on child marriage in March 2020.

Speaking out on Twitter, the Segambut Member of Parliament (MP) said that the police is currently investigating her Tweet on 9th March where she questioned the future of Malaysia’s national policy on child marriage following the appointment of Datuk Siti Zalihah Mohd Yusoff from PAS as the Deputy Minister of Women & Family Development.

Shortly after coming into office, Siti Zalihah was slammed for emphasising shariah-compliant attire for flight attendants as workers in the industry were bracing employment issues in light of Covid-19.

I have been called by Bukit Aman to testify for the investigation of this tweet. Nowadays, even asking questions is not possible. There was also no opportunity to ask questions in May’s Parliament session. This roadmap is the work of the PH administration.

The National Strategy Plan in Handling the Causes of Child Marriage was rolled out in January this year by the Pakatan Harapan government as a detailed strategy to address the issue.

The 5-year plan had 17 strategies with 58 programmes planned to be carried out by 61 agencies.

With the sudden government change to Pakatan Nasional (PN) in February and the following pandemic, there has been no update on the programme or the issue of child marriage.

PDRM: RM50 On Food Aid For Elderly Not Related To Melaka State Elections