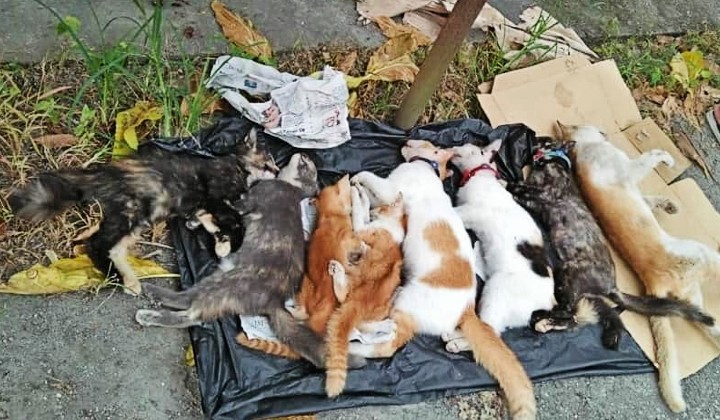 A psychotic cat killer is on the loose in Rawang.

A posting made by the Malaysian Animal Association Facebook page shares the harrowing news of how residents at Apartment Seri Lili in Bukit Beruntung discovered 11 neighborhood cats had been poisoned to death.

An image that accompanied the post showed the dead felines all lined up in a row, laying lifeless on the ground.

Some were merely teeny, tiny kittens, and some still had their collars on showing that they in fact had owners.

The unsightly scene naturally riled the emotions of Malaysians who took to social media to express their grief, anger, and disgust at the heinous act, with residents of the apartment, also commenting concerned over the safety of their own pets.

Speaking to Astro Awani, Malaysian Animal Association President Arie Dwi Andika says that they are currently investigating the case of animal cruelty and asks that any witnesses to the crime to step forward to help.

We hope that witnesses can come forward to aid in investigations and that they need not worry because their identities would be protected.

According to the Animal Welfare Act 2015, persons guilty of administering or providing poisonous substances to ANY animal is liable to a minimum fine of RM20,000 or a maximum jail time of 3 years, or both.