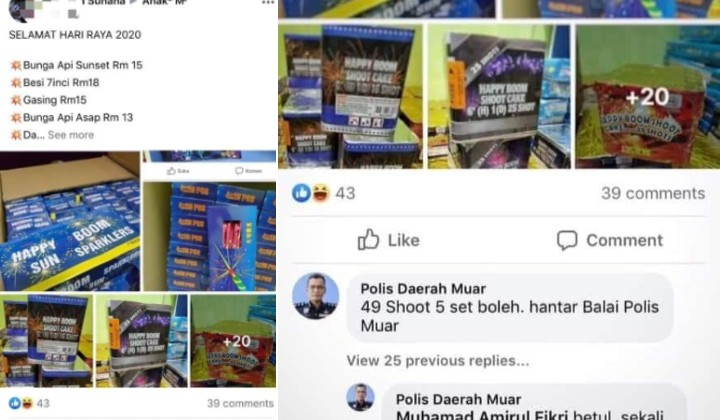 A local entrepreneur was caught red-handed by the police trying to sell illicit firecrackers and fireworks on a private Facebook group.

Apparently a seller had made a posting on the Anak-Anak Muar group page promoting the “mercun” that they had in stock.

Impressively, the posting received a snarky reply from the official Facebook account of the Muar district police department, sarcastically placing an order and asking it to be delivered to the station.

The police page then proceeded to post up a press release from Bukit Aman warning Malaysians against the purchase and sale of “mercuns”, online.

According to PDRM’s managing director Datuk Abdul Rahim Jaafar, legal action can be taken against anyone that takes part in such activities.

Because of the current Conditional Movement Control Order (CMCO), Abdul Rahim explains that brick and mortar vendors are prohibited from selling firecrackers and fireworks, let alone to take their businesses online.

As you’ve already figured out, firecrackers and fireworks here in Malaysia are “technically” illegal, and being in possession or playing with ‘em can land you an explosive RM10,000.00 fine or jail time of up to 5 to 7 years as according to the Explosives Act 1957.

All except for some 40 different Happy Boom and Pop-Pop firecrackers, which are allowed to be sold to the public.

However, we’re pretty sure the online ban extends to all types of “mercun” and “bunga api”, so its best to keep your e-wallets away from ’em for now.