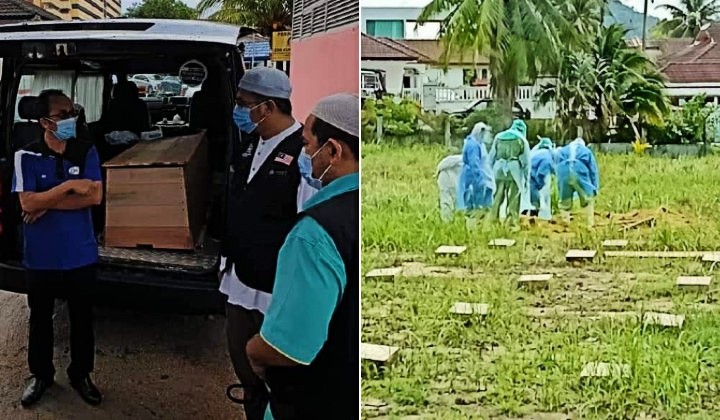 A man infected with Covid-19 was found dead by the roadside in Pahang.

30-year old Mohd Haszlee Hashim had apparently tried to make the over 400-kilometer journey from Johor to Terengganu, on foot, to be with his family following the nationwide Movement Control Order (MCO).

His tragic tale was shared on social media by Skuad Pengurusan Jenazah Malaysia (SPJM), a local non-profit that performs funeral rites for Malaysian Muslims and non-Muslims.

As the story goes, the deceased had been staying with his family in Kuala Terengganu before migrating to Johor in search of better opportunities.

There he stayed with an uncle and found employment as a security guard at the Segamat Hospital before resigning his position in January.

Mohd Haszlee had been looking for other career opportunities as the MCO came into effect in March, leaving him trapped in Johor with no way of returning to his family.

The deceased is said to have a 7-year-old daughter that he hasn’t seen in over a year, who was staying with his ex-wife, back east.

On the morning of May 8, Mohd Haszlee came to the decision to walk all the way home while keeping in contact with his sister in Terengganu throughout the journey before the two lost connection with each other along the way.

After failing to contact her brother, the sister had reached out to the authorities to look for the lone traveler.

Apparently the deceased had also passed a police roadblock along his route and was advised by the authorities against continuing his journey, noting that he appeared to be exhausted at the time. However, he ignored the instructions and proceeded to continue on.

Mohd Haszlee was found dead by a roadside in Muadzam Shah, Pahang on the noon of May 11.

During his autopsy at the Tengku Ampuan Afzan Hospital in Kuantan, it was determined that the deceased was positive Covid-19.

Dishearteningly, Mohd Haszlee’s family had lacked the funds to proceed with his burial. It was then that the hospital contacted SPJM to aid with the funeral.

The deceasedâ€™s funeral rites went on in accordance with official guidelines, where the remains must be handled with complete personal protective equipment (PPE) and the family not being able to partake in the procession.

His story also managed to capture the attention of Kuala Terengganu MP Ahmad Amzad Hashim who came to visit and provided the deceased’s family with a humble donation.

Previously, a 29-year-old man from Kelantan tried to attempt the same feat of walking from Kuala Lumpur to Kelantan to be with family following the MCO.

The man managed to safely reach his destination after a police officer had stepped in to help the traveler hitch a ride back home in a lorry bound for Terengganu.