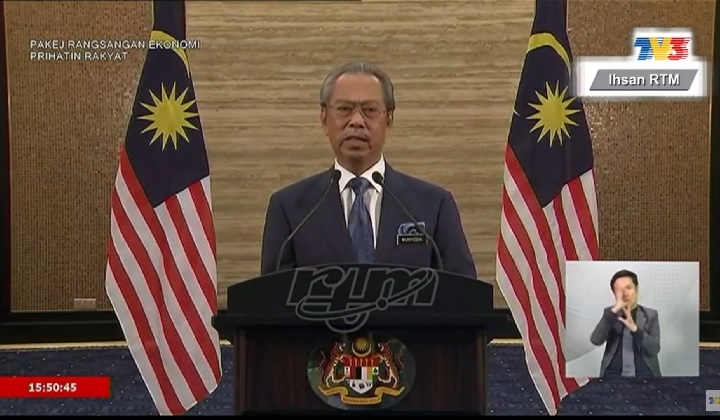 Of that amount, almost RM128 billion is going the public’s welfare, RM100 billion is for the business sector, including small and medium enterprises.

Of what remains, RM2 billion is being channeled to strengthen the economy, and the remaining RM20 billion is actually from the previously announced stimulus package.

“No one will be left behind,” said Muhyiddin during the announcement and it seems he’s trying to ensure everyone gets something.

On the fight against Covid-19, Muhyiddin said he had already pledged RM500 million to the Health Ministry but was adding another RM1 billion to that for the purchase of supplies and services, including from the private sector, to fight the pandemic.

To ensure more Covid-19 tests are carried out, the insurance and takaful industry will build an RM8 billion fund to help pay up to RM300 for each policy holder who has been ordered to be tested by the Health Ministry.

Insurance and takaful firms will aslo be offering a moratorium on the payment of premiums for three months.

To help frontline healthcare workers, the government will also be increasing an earlier allowance from RM400 to RM600 a month starting from April and lasting till the pandemic ends.

Army, police, customs, immigration, Civil Defence Force, and RELA will also be getting an additional RM200 per month.