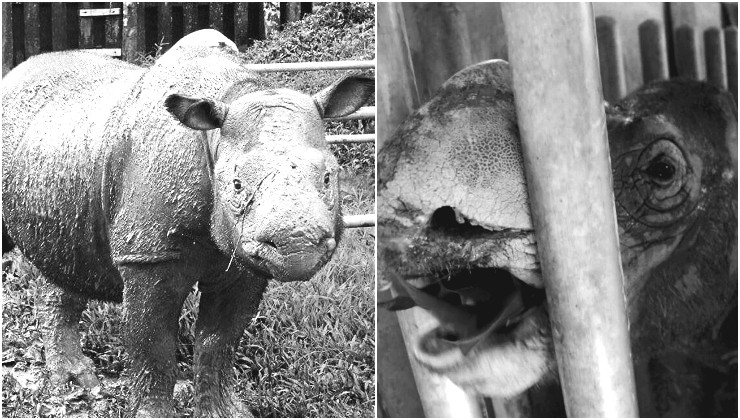 UPDATE: Iman reportedly passed away on 23 November 2019. The death was a natural one, with the immediate cause being categorised as shock.

Authorities are hoping that they can still obtain egg cells from Iman and proceed with the Malaysia-Indonesia collaboration. However, the memorandum has yet to be signed.

The Sabah Wildlife Department has announced plans to preserve Imanâ€™s carcass and hand it over to the Sabah Museum.

Kertam, Malaysiaâ€™s last male Sumatran rhino had also been preserved after he died earlier this year.

With a thin coat of iron-tinged hair and a lifestyle adapted to the mountainous rainforests of our region, the Sumatran rhinos are the smallest rhino on earth.

They are also the most endangered rhino species. Sumatran rhinos are split into about a dozen subpopulations based on their geographical location and have no gene exchange.

In fact, the remaining rhinos are so separated that experts believe isolation threatens to wipe them out completely in Indonesia.

We are currently losing the one and only remaining member of our Sumatran rhino species. Iman, the only surviving Sumatran rhino in Malaysia is dying from a non-malignant uterine tumour that has spread to her urinary bladder.Â

In April 2019, Malaysia reportedly had three remaining Sumatran rhinos left in captivity, with the species found to be completely wiped out in the wilderness.

The three rhinos left were Iman, another female named Puntung and one male rhino named Kertam. All three rhinos were kept at the Borneo Rhino Sanctuary in Tabin Wildlife Reserve, Lahad Datu.

Since then, Kertam, who was in his 30s, passed away due to old age and multiple organ failures in May.

Today, we bid farewell to Tam, our last surviving male Sumatran #rhino. Our hearts are filled with sadness as we mourn the loss of a species. With Tam gone, we now only have Iman left, our last female rhino. Let the loss of Tam be the wakeup call. Our #wildlife needs protection pic.twitter.com/3E6LbY5EzN

Meanwhile, 25-year-old Puntung was euthanised in June due to a squamous cell cancer that resulted in a large tumour on her face which rendered her unable to breathe or vocalise, and in so much pain that her condition was declining quickly.

Iman, whose condition was declining earlier this year appeared to be recovering in August after receiving treatment for her uterine tumour.

Iman already had the tumour when she was captured.

In March 2014, vets discovered Iman’s tumour from ultrasound tests after initially thinking the tumour was a pregnancy.

FYI, due to a quirk in their biology, female rhinos that go too long without breeding develop problems in their reproductive tracts that can prevent future successful pregnancies.

Governments of Malaysia and Indonesia joined hands to save the species

The plan was to extract Imanâ€™s ovums and fertilise them with sperm cells from a male Sumatran rhino from Indonesia through in-vitro fertilisation (IVF).

The fertilised ovum would then be placed into a surrogate, another female Sumatran rhino from Indonesia.

Our only hope to keep the Bornean Sumatran rhino genes alive.

However, the agreement is still in the works, with rhino experts still awaiting the Indonesian and Malaysian governments to complete the administrative process.

Now it looks like we might be losing Iman sooner than we thought as Sabah Deputy Chief Minister Datuk Christina Liew recently announced that Imanâ€™s condition is deteriorating.

According to her vets, halting the growth of these tumours or removing them through surgery is impossible and too dangerous as there would be inevitable major blood loss that could kill her immediately.

Christina Liew has said that the state government would expedite the legality processes with their Indonesian counterparts for the IVF.

Letâ€™s hope Iman holds on long enough for a successful IVF, sheâ€™s our only hope for the survival of the species now.

Super Tired But Refuse To Sleep At Night? You’ve Got Revenge Bedtime Procrastination