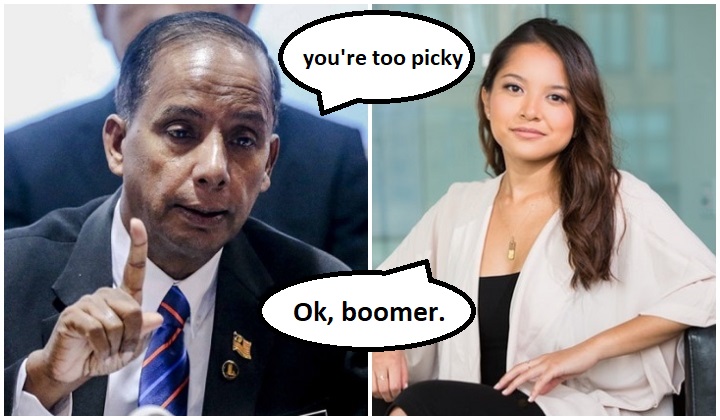 Youth nowadays are too picky. You kids are so spoilt nowadays. I used to wrestle with crocodiles daily on my way to work in 1669!

How many times have you heard your parents/ grandparents/ aunties/ uncles/ neighbour’s aunty and uncle say the things above?

In Parliament on Monday (4th November), Kulasegaran said that there are almost 640,000 vacancies across the nation that also include management, professional, technical and others, but the youth are not willing to take these jobs.

Meanwhile, Malay Mail reported that Mohd Cairul claimed graduates were choosy in applying for jobs and the poor response by young people to take available job opportunities were among the reasons why there were unfilled 600,000 job vacancies.

Is it true that Malaysian youth are picky, though?

The answer is NO.

A 2018 report by Khazanah Research Institute (KRI) found that Malaysian youth are NOT choosy about jobs. In fact, they specifically state:

Notion that youth are selective about jobs is a myth.

The School-to-Work Transition of Young Malaysians (SWTS) report highlights that most of the youth are “over-educated”, with most taking up unskilled and low-skilled jobs.

It also finds that their current jobs are not related to their level or field of education and their actual jobs are not their preferred jobs.

Besides that, the SWTS report also touches on the wage issue, concluding that:

Notion that youth ask for “unrealistic”wages is a myth.

Young part-time Malaysian workers and contributing family workers earn below their reservation wage just so they have a job. Reservation wage is the lowest wage rate at which a worker would be willing to accept a particular type of job.

This is hardly surprising as we’ve come across many tales of Malaysians taking up gig-economy jobs just to have a means of income, such as the PhD food delivery rider who confessed to having depression and an aircraft engineer turned deliveryman.

An interesting note in the report also touched on the mismatch of job search and recruitment methods, which could perhaps point to the “slow hiring” of the over 600,000 vacancies as Kulasegaran reportedly said.

It appears that youth tend to seek out employment mostly in the public sector or job fairs and open interviews.

However, employers primarily use online advertisements and through networks
of friends and relatives.

Perhaps it’s finally time to lay the “picky youth” narrative to rest because the myth is BUSTED.