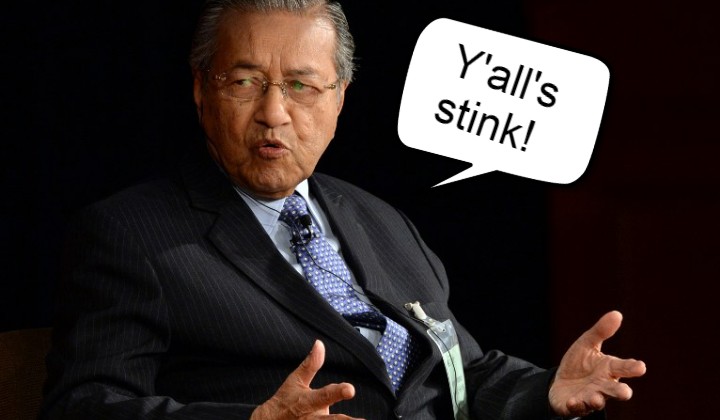 The Prime Minister Tun Dr Mahathir Mohamad is calling out Malaysians over the disgusting state of our public toilets and the general health of public cleanliness.

The 94-year-old “sanitary inspector” said that he was appalled by the lack of morals embodied by the nationâ€™s citizen and the peopleâ€™s ignorance towards the environment.

He explained that the state of our public facilities and surroundings is a direct reflection of the peopleâ€™s mindset, that for ages had been nothing but stinky.

The premier also threw down the gauntlet on litterbugs who make the planet their dumping ground.

Targeting smokers who carelessly pollute the environment with â€œmountainsâ€ of cigarette butts, Tun M expects the country to be buried under the mess in no time if nothing is done.

Which is true considering studies shown that an estimated 4.5 trillion cigarette butts are littered across the planet, greatly damaging the ecosystem.

The prime minister also pegged away at vandals who deface our streets with graffiti.

Tun M was quick to point out that those who show their artistic side with murals were, cool…

Whatâ€™s not cool are the scribbling and chicken scratches done by the uncultured members of society.

Expressing his admiration for the Japanese and their culture of cleanliness, Tun M said that Malaysians should start from the very grassroots, beating civic responsibility and good moral values into its people.

The prime minister added up his point by expressing the importance of educating our youths on the gravity of keeping our habitat clean.

Sungai Pinang Continues To Be Polluted Due To Lack Of Aggressive Action, Says Environment Group