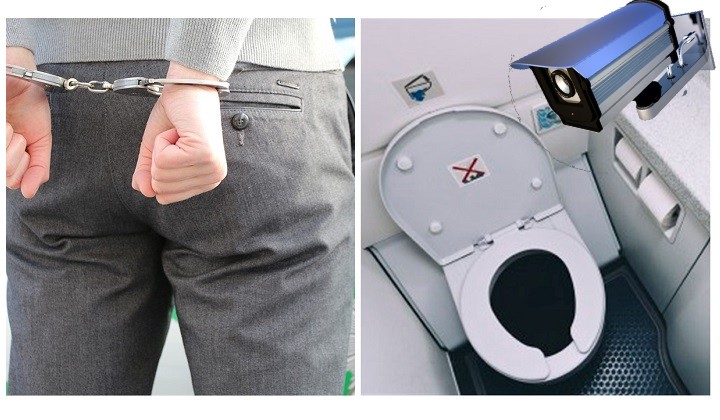 In another episode of Malaysians embarrassing us overseas, a Malaysian pervert has been charged in the US federal court for placing a hidden camera in an airplane bathroom.

Whatâ€™s worse is that the Malaysian is the FIRST person
to be charged under a law against video voyeurism in Houston, Texas.

According to ABC News, Lee Choon Ping had planted a video camera on a United Airlines flight from San Diego to Houston in the US back in May.

The hidden camera was then discovered by a female passenger who
noticed a blue blinking light near a door hinge.

Suspicious of the object, she passed it to the flight crew after leaving the bathroom.

â€œThe item was loosely hanging and she wasnâ€™t sure if the item was part of the aircraft, but thought it was odd.â€

The object was then confirmed to be a video camera by the
airlinesâ€™ security at the Houston airport.

Going through the footage in the video camera, they saw a man
with a watch on his left wrist and small bracelet on his right fixing the
camera to the toilet. They could also see that he was wearing a blue
short-sleeve shirt and blue jeans but couldnâ€™t spot his face.

The case then went over to the FBI.

Working together with the Houston Police Department, they discovered
deleted recordings from an Emirates Airlines flight.

Scouring airport surveillance footage, the authorities soon narrowed
it down to Lee, who was sitting in first class on the flight.

They quickly found out his workplace and discovered that he
had travelled on Emirates Airlines for business AND found work pictures of Lee wearing
the same watch and bracelet in the video.

With enough evidence in hand, Lee was arrested for â€œvideo voyeurism aboard an aircraftâ€ under US law that prohibits capturing images or video without consent of a someoneâ€™s genitals or â€œany portion of the female breastâ€ in a location where a person has a reasonable expectation of privacy.

Lee is currently being held in a Houston detention facility,
awaiting bail hearing.

If found guilty of the crime, Lee will be jailed up to a year in US prison.

Wanna Book Flight Tickets For GE15? Here Are Some Tips