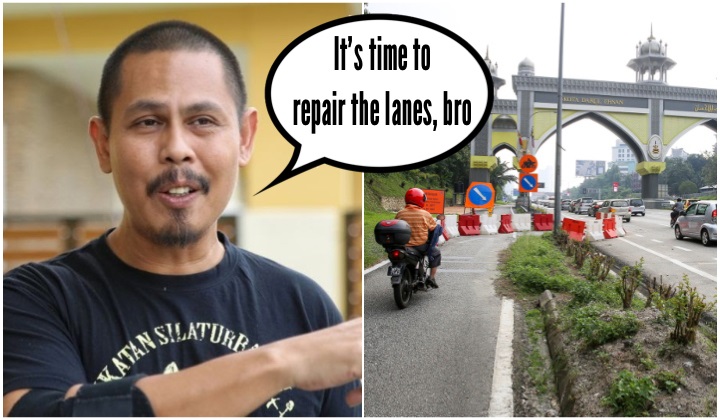 Azlan Sani Zawawi, a.k.a Lando head of Ikatan Silaturahim Brotherhood is planning to organise “Kempen Sayangi Laluan Motosikal to raise awareness on the safe use of bike lanes in the Klang Valley.

Speaking to Malay Mail, the former actor said that Malaysia’s bad roads are not due to technical shortfalls, but because the authorities don’t care about doing a good job.

Lando and Ikatan Silaturahim Brotherhood are the same guys who became famous in 2016 after they gave up depending on state municipal councils and decided to fix road potholes by raising money themselves.

“We need this campaign to kick start a road safety workshop nationwide and I will only do it if the Ministry of Works and the Public Works Department sit down and agree to certain terms.

“Firstly, the roads that they promised to repair must be fixed meaning they should be wide enough for two bikes to ride side-by-side and secondly, the lanes should be well lit… especially the tunnels where a lot of robbery, theft and assault cases have been reported.

“The last request is for someone to monitor these roads at all times or at least make their rounds once every hour to make sure everything is in order as right now, every time someone gets on the bike lane their mortality rate increases.”

The unfortunate truth is that using bike lanes in Malaysia is downright dangerous.

Next year is 2020 and Dr Mahathri’s vision was to have flying cars. But if you look closely, we already have flying cars and bikes because of the lubangs (holes) on the road.

Besides inadequate road signs and barriers, motorcycle lanes are not well maintained, and are often littered with uncovered drains and potholes.

Additionally, motorcycle lanes here are often not well lit. This has resulted in thieves robbing and assaulting motorcyclists who use the dedicated lanes at night.

I’ve lost 10 friends to date due to bad roads and accidents, bro.

Lando’s latest campaign targets motorcyclists in the Klang Valley who use the 16-kilometre long Federal Highway from Subang to Mid Valley.

He said these roads need immediate attention as they are the most damaged and most frequently used.

According to Malay Mail, the motorcycle lanes on the Federal Highway have been under construction since 2017 when they were first closed for upgrading works.

Most motorists don’t realise how the terrible state of dedicated motorcycle lanes affect the safety and lives of all road users.

When the bike lanes are closed, motorcyclists HAVE NO CHOICE but to use the highways.

And this is dangerous to all motorists, two wheels or four.

Now days, you see motorcyclists speeding in the fast lanes, competing with larger vehicles for space in the lanes. During traffic jams, this problem becomes worse as motorcyclists weave between cars at high speeds.

However, if motorcycle lanes were better maintained, motorcyclists riding dangerously on highways would be a problem of the past.

Lando told Malay Mail that he has managed to hold a major meeting with Works Minister Baru Bian and relevant parties during Ramadan and plans to meet them again soon to figure out a way for the roads to finally be repaired.

After the government guarantees that they can and will repair the damaged motorcycle lanes, Lando’s campaign will then teach riders how to use the roads responsibly, including lessons on how to overtake safely, how to exit and enter the bike lanes, steps to take in case of rain and floods as well as lessons on how to be courteous and respectful riders.

He hopes the campaign will reduce accident and fatality rates of motorcyclists in the country.