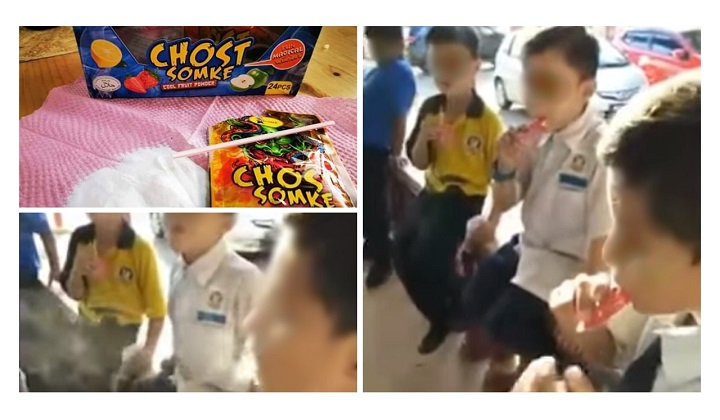 Vaping is cool now. According to teens, anyway.

But it seems like the trend has hopped onto a younger set of fans: Schoolkids.

There is a video that has been making rounds on social media showing three schoolkids in Kota Kinabalu â€œsmokingâ€ a candy.

In the video, an adult is heard asking the kids if thatâ€™s how youâ€™re supposed to eat the candy. She then asked them if itâ€™s tasty, to which they replied â€œyesâ€.

The schoolkids also told her that they donâ€™t swallow the
candy, but let it dissolve in the mouth to release the â€œsmokeâ€.

The candy featured in the video is said to be â€˜Ghost Smoke’ – a powdery substance sold in packets that calls itself â€œcool fruit powderâ€. Kids consume this candy by sucking the substance through a cigarette-like straw to produce â€œsmokeâ€ from their mouths.

Naturally, the video sparked a wave of concern over the safety and ethics of such a candy being sold to schoolchildren. Many are concerned that this candy is a slippery slope towards vaping and smoking.

According to a Facebook post by a concerned user, the Ghost Smoke candy is sold for a mere RM1 or 50 cents and available on e-commerce sites.

Several branches of the authorities have come together to investigate
the matter.

The Star reports that crackdown on the sale of he Ghost Smoke candies have begun in Sabah with Sabah Health Department confiscating the candy under the Food Acts 1983 for labelling offences.

Meanwhile, the Food Safety and Quality Division of the Health Ministryâ€™s has begun an investigation on the vape-like candy and Datuk Seri Dr Wan Azizah Wan Ismail, Deputy Prime Minister has called for a ban on these candies.

Schools in Sabah are also on alert on the sale of the
vape-like candy and urged to monitor students.