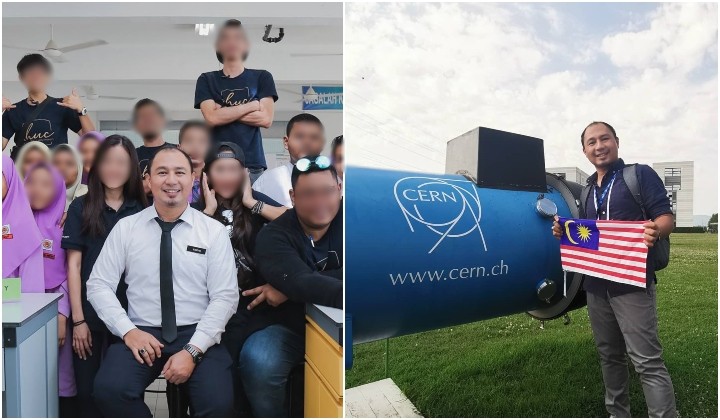 A Malaysian schoolteacher from Kedah has done the nation proud with his acceptance into the High School Teacher Programme 2019, at European Organization for Nuclear Research (CERN) in Geneva, Switzerland.

The brilliant teacher is Norhailmi Abdul Mutalib, also known as Cikgu Hailmi, a science and chemistry teacher at SMK Jerlun, Kedah who got the news back in April and is currently in Geneva for the two-week programme.

A knowledge sharing programme for science teachers around the globe, the High School Teacher Programme 2019 by CERN promotes the teaching of particle physics in secondary schools.

The programme which takes places from 7th to 20th
July is open to all nations that have a scientific relationship with CERN, which
includes Malaysia of course!

CERN is a European research organisation that basically tries to answer all the big science questions like â€œWhat is the Big Bang?â€, â€œWhatâ€™s inside a black hole?â€ etc (you get the idea).

They operate the largest particle physics laboratory in the world, home to the famous Large Hadron Collider aka the world’s largest and most powerful particle collider.

Theyâ€™re also responsible for the discovery of the â€œGod Particleâ€ or Higgs Boson, a particle that gives mass to all elementary particles that have mass, such as electrons and protons.

Weâ€™re not exactly the best people to explain the physics behind
the God Particle, but this guy seems to know what heâ€™s talking about:

Hopefully Cikgu Hailmi will be able to explain it to us when
he gets back from Switzerland.

Weâ€™re pretty confident of his capabilities as heâ€™s also
joined the Honeywell Educators at Space Academy 2018 in the US Space and Rocket
Center last June. Thatâ€™s where he heard about this CERN teaching programme from
a Romanian teacher.

He then submitted a lengthy essay about himself and particle physics along with a video profile. In his blog, he states his confusion in understanding quantum physics and all its complexities, but his diligence paid off. He got in!

In an interview with GPS Bestari, Cikgu Hailmi relays his gratitude in being one of the lucky few to be selected.

â€œThere will be learning sessions and group performances in the programme. The focus is on particle physics and I have little knowledge in the field because my major is chemistry, so this opportunity is great for me.â€

He also takes his duty as a teacher seriously, urging
teachers to focus on their role as educators.

â€œRemember one thing… What we do now, may not see the result immediately. But someday, that’s what will bring forth a brilliant generation in the future.â€

Cikgu Hailmi is joined by 49 teachers across 38 countries in Geneva and will share his experience on his blog (www.cikguhailmi.com) and GPS Bestari.

We wish him the best of luck!