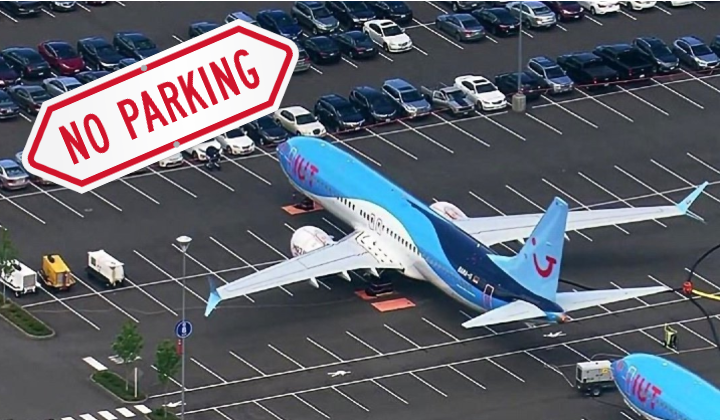 Airplanes, as the name would suggest, are meant to be flying up high in the air, which is why having one parked along cars, trucks and several other land-dwelling vehicles is quite the plane sight to see.

Images of flightless Boeing 737 MAX aircraft have
been popping up across social media.

Historical moment in Aviation history! ✈️
Aerial images show the Boeing 737 MAX aircraft parked in the staff car park because there is no more capacity left at the airport. pic.twitter.com/TZ3MKH8rdM

Just look at all of em cutely sitting in rows…

Grounded Southwest 737 MAXs seen from a Cessna 172 circling overhead Victorville a few days ago. 33 out of 34 of Southwestâ€™s MAXs are parked at VCV. Apparently the one missing airplane is the MAX that did an emergency air-return out of Orlando due to engine problems after takeoff. #southwestairlines #boeing737 #737max #victorville #socal #california #desert #storage #parkinglot #boeing737max8 #737 #southwest #cali #planespotting #cessna #canon

Both incidents were believed to have been caused due to issues in the 737 MAXâ€™s sensory equipment and software.

The aviation giant currently has over 500 737 MAX jets grounded across the globe as Boeing seeks regulatory approval for the fixes made to their flock.

The company is reportedly forking up around $2,000 (roughly RM8,286) for each parked plane.

Over 100 birds alone are perched around the companyâ€™s factory in Washington State, US filling up the company’s parking lot while the factory keeps churning out new ones every day.

Catch this video to see the many big birds that are nestled around the Boeing facility.