The driver Cass and her dogs escaped unhurt but was left shaken by the incident. 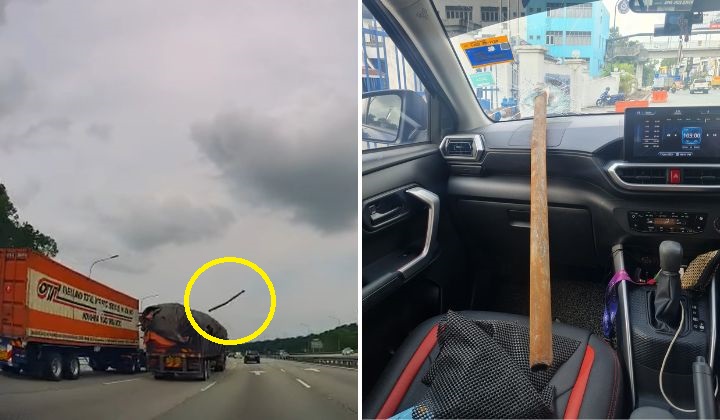 A Malaysian woman Cass Cheng had a close shave with death while driving along PLUS highway on 14 January.

On Facebook, a shaken Cass said she was near a lorry in the next lane when a metal pole suddenly flew out from the lorry.

Before she could react, the pole slammed right through her windscreen. Luckily, the pole went through the passenger side and her dogs in the car were safe too.

Cass knew she couldn’t afford to panic on the road so she drove a little slower to recover from the shock.

It does look like a Final Destination movie but it’s not. I thought I would die and my dogs were with me, they might too.

She couldn’t capture the lorry’s number plate but hopes that Transport Minister Anthony Loke and the Road Transport Department (JPJ) can do something about lorry regulations.

She told World of Buzz she has lodged a police report and the car repair cost more than RM1000.

Netizens were glad that she escaped unhurt and had no front passenger with her. They couldn’t imagine the horror if there was a passenger beside her.

A netizen also pointed out the importance of having a dashcam to record incidents like these.

Meanwhile, another netizen claimed the lorry didn’t seem to have a number plate at all.