‘The 15th General Election for P.17 Padang Serai is postponed due to the death of a candidate.’ 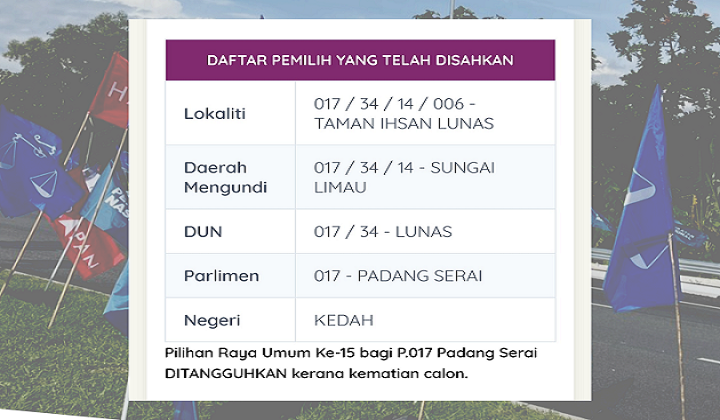 The Election Commission (EC) has yet to make an official announcement concerning the Padang Serai parliamentary seat election.

The commission, in a statement yesterday, informed that the Returning Officer (RO) had returned the election writ in which it was stated that a candidate for the constituency had died.

A meeting would be held on Friday 18 November before the EC makes an announcement on the important dates for the Padang Serai election.

However, a Padang Serai voter who checked her details on the MySPRSemak portal told The Rakyat Post that polling day information had been removed, and there was an alert published instead:

“The 15th General Election for P.17 Padang Serai is postponed due to the death of a candidate.”

The Padang Serai seat incumbent was a PKR branch chief and would have faced five other opponents in his fight to retain the seat.