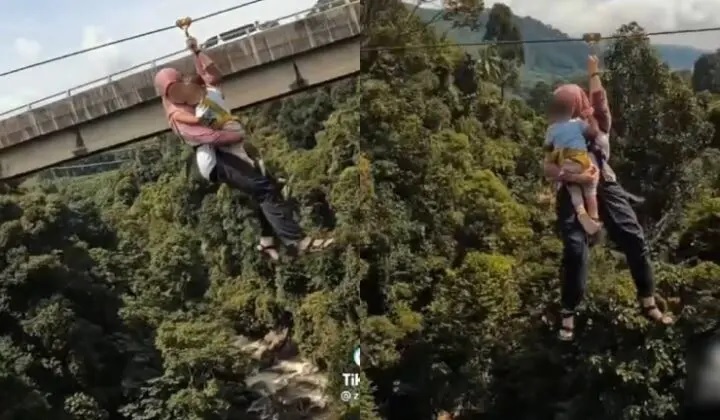 Recently, a video showing a woman with a baby strapped to her side, zipping down the flying fox line, suspected to be in Kuala Kubu Bharu, went viral on social media.

It courted debate amongst Netizens, with some saying it was too dangerous for a baby and others arguing that if it were a caucasian doing it, the act wouldn’t have been criticized as much. There were also those who saw nothing wrong with the act, as long as all safety measures were in place.

In the video, one of which was shared by Twitter account @My_CrimeWatch, the woman was seen without a helmet.

Following the viral sharing, police issued a statement saying they were looking into the matter.

“The Kuala Kubu Bharu police station received a report on the viral video showing a woman engaged in an extreme sport (flying fox) while holding a child and ignoring personal safety as well as that of the child.”

“Meanwhile, the police would like to call for calm and for the public to not worry regarding the viral issue,” he said.

Those with information can come foward to assist in investigations by going to a nearby police station or call the Hulu Selangor district police headquarters at 03-60641223.