People in Kuching, Sarawak, reported hearing a loud explosion an hour before witnessing a long line of clouds in the sky. 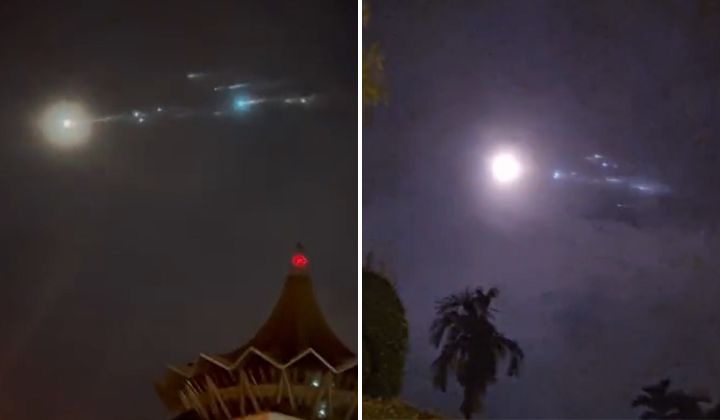 A few people in Sarawak managed to see a massive piece of space junk – apparently from the Chinese Long March rocket – as it crashed down to earth hours ago.

According to The Star, the US space agency NASA said the 22.5 tonne core stage of the Long March 5B rocket re-entered the Earth’s atmosphere over the Indian Ocean at approximately 12.45am on Sunday (31 July).

Netizens from Sarawak thought they were witnessing a meteor before finding out what it actually was.

In the videos, the falling remnants of the space junk looked like a big spaceship approaching Earth.

Hanif (@hanifDaslepzz) said an explosion was heard over Kuching an hour before spotting a long streak of clouds.

What’s the Long March 5B rocket?

The Long March 5B rocket blasted off on 24 July to deliver a laboratory module to the new Chinese space station under construction in orbit.

It’s China’s third flight of its most powerful rocket since its maiden launch in 2020.

Should anyone worry about falling debris?

Based on the Malaysian Space Agency (MYSA)’s latest update, some of the smaller debris ended up around the Sulu Sea.

Previously, MYSA announced that any debris from the rocket was unlikely to land in Malaysia.

MYSA explained in a statement that the location of the debris re-entry can’t be predicted accurately until a few hours prior to re-entry.

In many cases, the forecast will vastly vary due to the change in the object’s physical characteristics during re-entry, including location and speed.

MYSA added that most of the debris (about 70% of it was water) would be burnt during re-entry into the Earth’s atmosphere while smaller fragments would land on Earth.

An astrophysicist and satellite tracker Jonathan McDowell from the Harvard-Smithsonian Center for Astrophysics said the video from Kuching implied that it was high in the atmosphere at the time.

McDowell added that the debris would land hundreds of km down the track, possibly near Sibu, Bintulu, or even Brunei.