The students have no choice but to use the ‘bridge’ that’s not for pedestrian use when the river overflows. 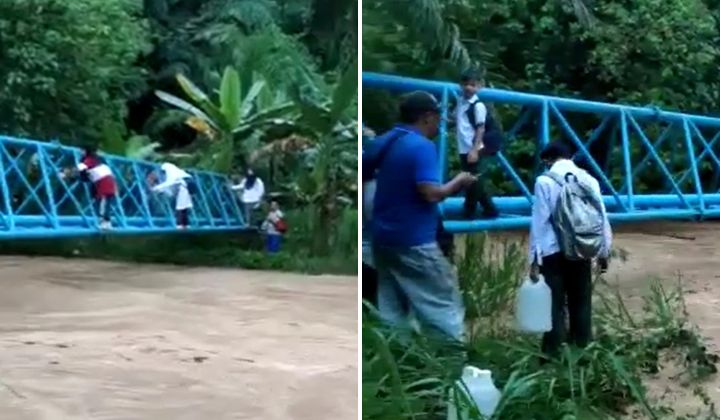 Students who live in Kampung Mansiang Baru in Keningau, Kota Kinabalu, have no choice but to cross the pipe bridge when the river is in high tide.

Based on the viral video taken on Tuesday (26 July), school students could be seen carefully traversing the pipe bridge, that’s not made for pedestrian use, while carrying their backpacks.

The students had to make sure they gripped the bars tightly and not lose their footing while the murky river water gushed below them.

It’s a dangerous task but it’s something the villagers are used to due to the lack of proper infrastructure.

Harian Metro reported that Tulid ADUN, Flovia Ng, said she has managed to secure a provision to build a proper bridge across Sungai Mansiang on 23 June.

Currently, the tender to build the bridge is opened.

Flovia Ng visited the village last January and explained that the villagers were forced to use the pipe bridge on days when the river is on a high tide.

There’s a Low River Crossing to cross Sungai Mansiang but it can only be used when it’s a low tide.

Ng said the priority is to build a proper bridge as soon as possible for the villagers.

Previously, students of SK Nangkawangan in Nabawan had to use a bamboo raft and a makeshift zipline using a metal drum to get to school and back home after high tides washed away the bridge.

Fortunately, a proper bridge has been rebuilt to replace the one that was washed away.