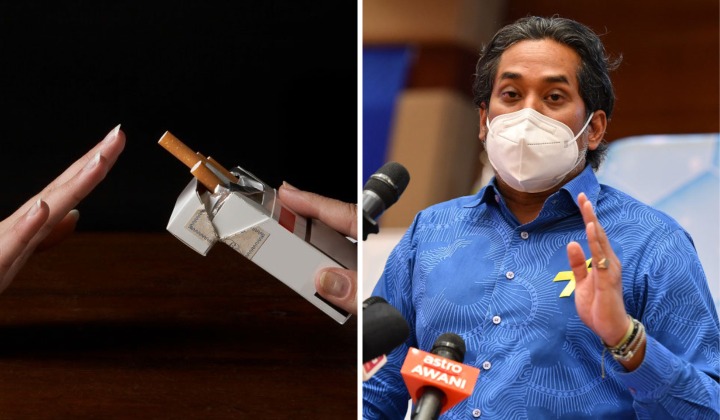 The Bill is then expected to be debated and passed during the current Dewan Rakyat meeting.

NST reported that the proposed Bill is divided into 12 parts with 55 clauses.

According to Malaysiakini, the proposed Bill stated that children born in 2007 and the subsequent years will be prohibited from smoking, buying or possessing any type of smoking products.

The ban includes using, buying or owning any electronic cigarettes or vape products even after the children reach the age of 18.

If they are caught breaking the law, they can be fined up to RM5,000.

Aside from that, a greater emphasis on the bill is placed on retailers and manufacturers of tobacco products.

The proposed bill also stated that any person or organisation who imports, manufactures and distributes tobacco products, smoking material and tobacco substitute products without a license will be penalised.

Any advertisement of tobacco products, relevant products or any materials that induce, suggest or encourage the use of tobacco is also criminalised.

Individual offenders can face up to a maximum one-year jail sentence or a maximum fine of RM20,000 or both.

Repeat offenders face a maximum two-year jail sentence or a maximum fine of RM30,000 or both.

Harsher punishments were proposed for corporate organisations and they can face up to two years in jail or be fined between RM20,000 and RM100,000, or both.

Repeat offenders will face imprisonment of up to three years or a fine between RM50,000 and RM300,000, or both.

According to Malay Mail, the proposed bill also shows that the Health director-general has full power in the approval and cancellation of tobacco or substitute tobacco products.

Should the Bill go through, distributors of these products must apply to be registered under this Act through the DG’s office.

The DG also has the right to cancel any approval of registration made for tobacco or substitute tobacco products if the applicant breaks any provisions of the Act, breach any conditions of the registration or has been convicted of any offence under this Act.

Additionally, the health minister can gazette any area, building or vehicle that the public has access to as a non-smoking area.

Will the proposed Bill work?

Initially, the proposed ban covered those born before 1 January 2005 but the Health Ministry decided to raise the age limit to 1 January 2007.

On Monday (25 July), Khairy said the changes were made to allow for “community education, a robust implementation plan and ramped up enforcement” before the laws come into effect in 2025.

The Tobacco and Smoking Control Bill proposed by Khairy aims to make Malaysia a tobacco-free country by 2040.

The proposed Bill has been met with resistance from several MPs, who cited issues such as the illicit market and enforcement.