The outspoken MP had recently been axed from the UMNO supreme council line-up. 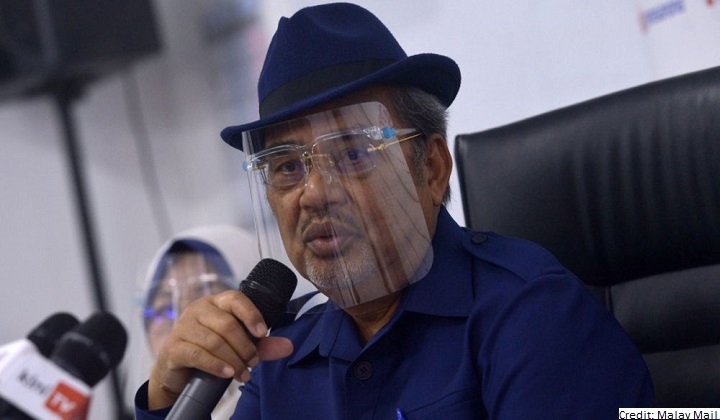 By now, most would have known that UMNO, had planned to install Opposition leader Datuk Seri Anwar Ibrahim as the prime minister before its own vice-president Datuk Seri Ismail Sabri Yaakob assumed the post.

During the same press conference, Tajuddin also revealed that there was an internal ploy to topple party president Datuk Seri Ahmad Zahid Hamidi – the same man that ordered for Tajuddin to be dropped from the Malay right-wing party’s supreme council line-up last Friday.

He also shared with the media a picture of a meeting in his house that was attended by several UMNO top guns including Najib, Mohamad, Datuk Seri Mohamed Khalid Nordin and Datuk Seri Nazri Abdul Aziz where they allegedly discuss the plan to remove Zahid from his post.

The former UMNO election director revealed all this a few days after he was removed by Zahid from UMNO’s supreme council line-up as he was critical of the party.

But who exactly is Tajuddin?

Despite being dropped from the UMNO supreme council line-up and in danger of being sacked from the party, Tajuddin appears to be relaxed and confident about retaining his seat.

Tajuddin also indicates that he could retain the parliamentary seat even if he’s outside of UMNO – as he had held the Pasir Salak seat for three terms – winning the seat in three consecutive general elections with an increasing majority each time.

During the last general election, Tajuddin retained the Pasir Salak seat after he emerged the winner of a three-cornered contest – defeating Salihuddin Radin Sumadi (Pakatan Harapan) and Zafarulazhan Zan (PAS) –  with a 7,712-vote majority.

In GE13, Tajuddin won the seat with a majority of 7,386 votes, a huge increase from the majority he enjoyed in 2008, whereby he won the seat for the first time with only a 2,688-vote majority.

He was also part of the Cabinet line-up from 2013 to 2018, during which he served as the deputy agriculture and agro-based industry minister.

Prior to that, he was the Kampong Gajah assemblyman between 2004 and 2008.

An ally to PM Ismail

Tajuddin was seen as one of Ismail’s loyalists. While Zahid’s faction within UMNO had repeatedly called for the 15th general election to be called immediately, Tajuddin is one of the few party leaders who opposed the idea and continue to back Ismail to lead the government.

On 13 June last year, Tajuddin said that instead of holding the general election during the pandemic, UMNO should mobilise the party’s election machinery to help the government contain Covid-19.

He is also Malaysia’s new ambassador to Indonesia.

Despite numerous calls for Ismail to replace Tajuddinn with somebody else, he defended the latter’s appointment, stating that the Pasir Salak lawmaker is a seasoned and experienced politician.

However, when the party was split into two in the late 80s as he was barred from joining UMNO Baru as he was seen aligned with its splinter party, the Semangat 46.

He was only allowed to join the party in 1990 after the allegation was found to be baseless.

Tajuddin, however, was sacked from the party in 1995 as he allegedly dished out a whopping RM6 million in order to win the Pasir Salak division chief post but was re-accepted into the party in 1998 and had since climbed up the ladder in UMNO.

He was terminated from his post by the Finance Ministry after being widely criticised for his way of handling a press conference following the LRT Kelana Jaya line train collision incident last year during which 47 commuters were severely injured, while another 166 people sustained minor injuries.

He also had caused uproars in Parliament in the last few years.

In 2008, he called Ipoh Barat MP M. Kulasegaran a “bastard” after the DAP lawmaker said that the Indian community in Pasir Salak doesn’t approve of him.

And in 2016, Tajuddin was reprimanded for his remarks after he referred to Seputeh MP Teresa Kok as “the only woman with a ‘kok’ in Parliament”.

Will we hear more from Tajuddin?

Based on his performance in the last three general elections, it is safe to say that Tajuddin remains popular with the Pasir Salak constituents.

While his position as UMNO member remains in the balance, as Tajuddin said, he can always defend his seat in the next general election by contesting as an independent candidate.

Hence, we can expect to hear more from this maverick politician in the future.