With a motorcycle borrowed from his in-laws, he works as a food delivery rider to cope with financial struggles at home. 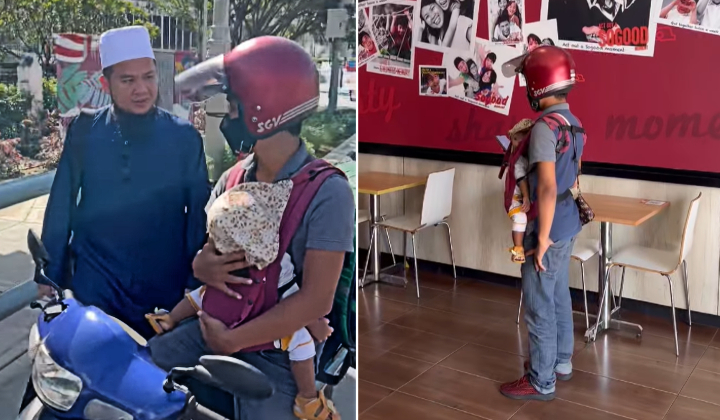 The dedication of a food delivery rider who was seen doing his job on a motorcycle with his baby strapped to his chest has touched the hearts of Malaysians.

A video of the unnamed man was posted on 16 June on Instagram and Facebook by celebrity preacher, Ebit Lew.

The man can be seen bringing his baby along as he collected the order and climbed a flight of stairs to make the delivery.

He borrowed a motorcycle from his in-laws and became a food delivery rider to cope with financial difficulties faced at home.

He has to take his baby along because there isn’t anyone else to take care of the child as his wife works at a clothing store.

“They don’t have enough money, he was crying when we met earlier today; I’m happy to be able to meet him,” Lew said.

A Facebook user, Muhamad Khairi Kassim said the man proved that a loving father would do anything for his family.

“This is a father’s love… he’s willing to sacrifice whatever it takes to gain a bit of happiness for his family,” he said.

Lew took the man to buy a motorcycle and offered to pay the monthly fees for a nanny so he doesn’t have to take his baby with him as he makes deliveries.

“At the point when we think we are struggling, others might have it worse,” he said.

“When he was given a motorbike, we can see his tears and it makes us feel more grateful.”