Two wins from three games is enough to secure Malaysia’s qualification into next year’s tournament. 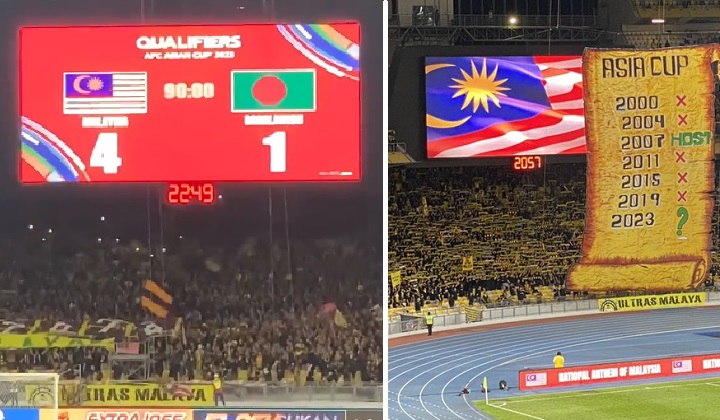 A resounding 4-1 win over Bangladesh last night means that the Malayan Tigers have achieved the target to qualify for next year’s Asian Cup set by the national team’s head coach Kim Pang Gon.

Malaysia took an early lead resulting from a penalty which was converted by Safawi Rasid in the 16th minute before Bangladesh equalised through Mohd Ibrahim in the 31st minute.

Despite knowing that a simple draw is enough to qualify due to the result from other groups, Malaysia however continue to press and was rewarded with another goal, scored by centre-back Dion Cools in the 38th minute.

Syafiq Ahmad, who captained the side in place of Farizal Marlias who was dropped to the bench following his howler in the previous match, scored a thumping header in the 47th minute to double the Malayan Tigers lead.

Darren Lok, who was brought in to replace Syafiq, completed the score line in the 73rd minute with a simple tap in after receiving a cross from the right.

What’s Next For Harimau Malaya?

Last night’s win also means Malaysia qualify for the first time on merit to the Asian Cup finals since the 1980 edition which was hosted Kuwait.

The last time Malaysia competed in the Asian Cup Finals was in 2007 when it co-hosted the tournament with Thailand, Indonesia, and Singapore.

The 2023 Asian Cup finals, will be the first time that 24 nations are competing in the tournament since its inception.

The tournament venue is yet to be determined after China withdrew from hosting it due to the ongoing Covid pandemic in the country.